The Art of the 'Finesse' in Bridge

If you want to take a trick with a queen, do her a favor and lead toward her; she may be able to escape the clutches of the king. This image shows you how the queen can elude the king. 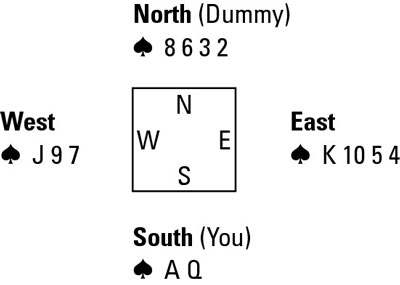 You want to take a trick with your ♠Q, but you don’t know who has the ♠K. (Yes, you can see the ♠K in East’s hand in the image, but if you were playing for real, you couldn’t see that ♠K unless you were Superman.) Here’s how this hand might play out:

If West (last to play to the trick) had the ♠K, your finesse would’ve lost.

This image shows another very common finesse involving the queen. This time, the ♠Q is in the dummy separated from her guardian, the ♠A.

Begin by leading a low spade, the ♠6, from your hand, the hand opposite the ♠Q. You’re hoping that West, the second hand, has the missing honor, the ♠K. In this case, West does have the ♠K. West has a couple of play options: 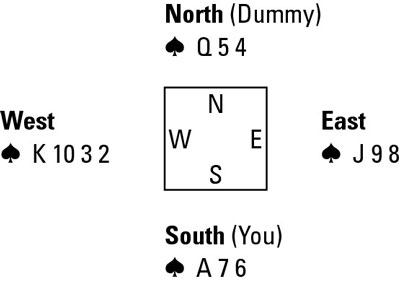 Of course, if East, fourth hand, has the ♠K, it gobbles up your ♠Q, and your finesse loses. C’est la vie.

How to finesse a king by an ace

This image shows a classic finesse position. You have the ♠K in the dummy; your opponents have the ♠A. You want to take a trick with the ♠K. 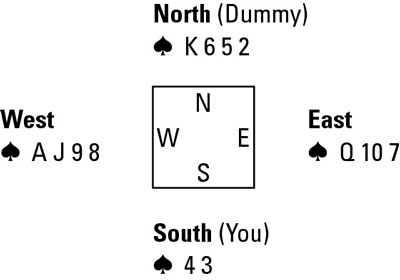 Lead a low spade from your hand, the ♠3, from weakness toward strength. West happens to have the ♠A, so she can make one of two moves:

Your finesse works. No matter what West does, you take either an immediate or an eventual trick with the ♠K.

Now check out this image, which presents a scenario just as likely as the one in the preceding image. 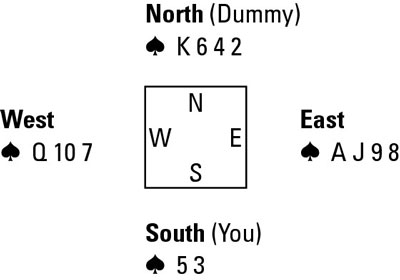 When you lead a low spade, the ♠3, and then play the ♠K in the dummy, East (the last to play to the trick) takes your ♠K with the vA. Your ♠K doesn’t take a trick. Your finesse has lost.

Don’t grieve — a finesse loses about half the time. Everyone thinks that their finesses always lose while the opponents’ finesses always win. It’s just a temporary pain. Successful finesses even out over the long haul.

How to finesse against split honors

Sometimes your opponents have two important honors in the suit that you want to attack in a hand of bridge. If those honors are split and each opponent has one honor, you can finesse those split honors, so you’re playing for split honors.

You have a chance to play for split honors with the cards shown in this image, a hand where you can take two finesses. 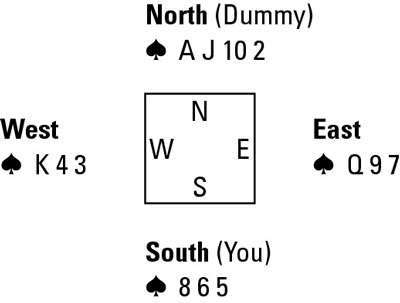 In this image, you have a powerful three-card honor combination in the dummy: the ♠AJ10. You normally attack suits with powerful honor combinations early. Because you’re missing both the ♠K and the ♠Q, two important honors, assume that the honors are split between the two opposing hands: