How to Drive Out Your Opponent’s Ace in Bridge

Explore Book Buy On Amazon
In bridge, you can create winning tricks in a suit, even if you don’t have the ace. When you have all the honors in a suit except the ace, you can attack that suit early and drive out the ace from your opponent’s hand. 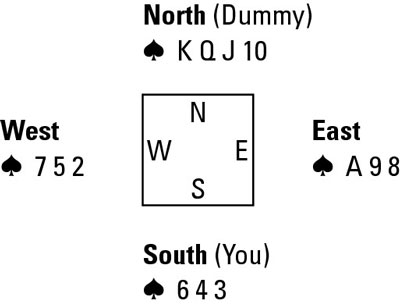 You can’t count a single sure spade trick because your opponent (East) has the ♠A. Yet the four spades in the dummy — ♠KQJ10 — are extremely powerful. (Any suit that contains four honor cards is considered powerful.)

Say that the lead is in your hand from the preceding trick, and you lead a low spade (the lowest spade you have — in this case, the ♠3). West, seeing the dummy has very strong spades, plays her lowest card, the ♠2; you play the ♠10 from the dummy; and East decides to win the trick with the ♠A. You may have lost the lead, but you have also driven out the ♠A. The dummy remains with the ♠KQJ, all winning tricks. You have established three sure spade tricks where none existed.