How to Drive Out High Honors in Bridge

When you play bridge, sometimes you have to drive out an opponent’s high honor card (could be an ace, a king, or a queen) before you can turn your frogs into princes (or turn your deuces into tricks). This example hand shows you how (with a little luck) you can turn a deuce into a winner during a hand of bridge. 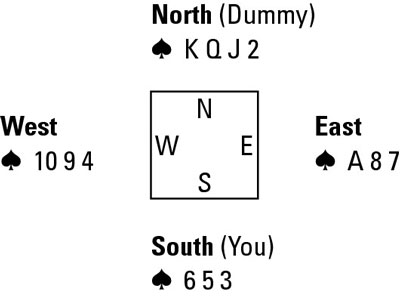 With the cards shown in the example, your plan is to develop (or establish) as many spade tricks as possible, keeping a wary eye on turning that ♠2 in the dummy into a winner:

Make sure that you count the cards in the suit you’re attacking. You’re in a pretty sad state if you don’t know (or aren’t sure) whether a low card in your hand or in the dummy can be a winner, and you leave it untouched because it’s such a small card.