How to Draw Trumps before Taking Extra Winners in Bridge

If you have enough tricks to make your contract in a hand of bridge, draw trumps (force your opponents to play their trump cards) before taking extra winners. By drawing trumps, your opponents can’t swoop down on your extra winner with a trump card and spoil your party.

In the hand in this image, you need to take ten tricks to make your contract, and spades is trump. 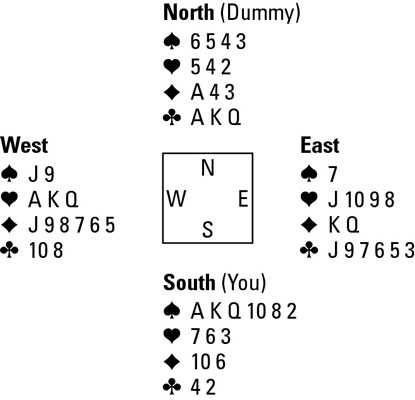 As soon as the dummy comes down, try to curb your understandable eagerness to play a card from the dummy and do a little loser counting, instead:

Your mental box score for this hand reads as follows:

Next, you determine how many losers you can lose and still make your contract. In this case, you need to take ten tricks, which means that you can afford to lose three tricks. (Remember, each hand has 13 tricks up for grabs.)