How to Combine Length with a Finesse in Bridge

In bridge, when you take finesses in suits that have seven or more cards between your hand and the dummy — meaning your side has more cards in that suit than your opponents (known as length) — you always have a chance of developing an extra trick or tricks with small cards, as this image shows. 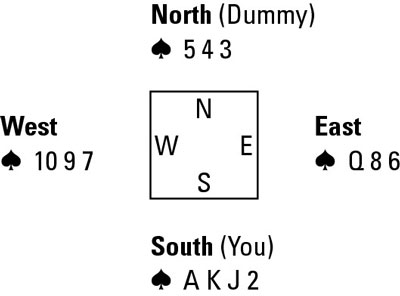 Of course, if West has the ♠Q, your finesse doesn’t work. You’re going to lose finesses about 50 percent of the time. When a finesse fails, keep your cool. Try to avoid showing emotion during the play — otherwise, you give your opponents too big a high.

Don’t let the risk involved with finesses scare you away from trying them, especially if you’re finessing in a long suit. A finesse in a long suit has the advantage of setting up small cards in the suit, even if the finesse doesn’t work.