Exploiting Length with No High Honor Cards in Bridge

If you don’t have any of a suit’s three top dogs (the ace, king, or queen) in a hand of bridge, but you have four or more cards in the suit, you can still scrape a trick or two out of the suit. When you have length (usually four or more cards of the same suit), you know that even after your opponents win tricks with the ace, king, and queen, you still hold smaller cards in that suit, which become — voilà! — instant winners.

Perhaps you’re wondering why you’d ever want to squeeze some juice out of a suit in which you lack the ace, king, and queen? The answer: You may need tricks from an anemic suit to make your contract. Sometimes you just get the raw end of the deal, and you need to pick up tricks wherever you can eke them out.

When you look at the dummy and see a suit such as the one shown, try not to shriek in horror: 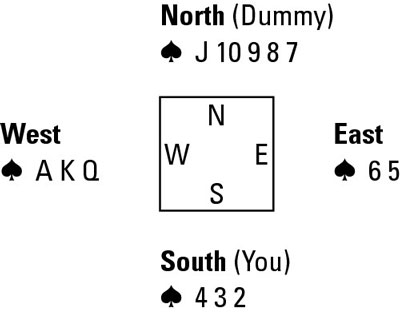 Do the spades in this image make you a little queasy? True, it isn’t the most appetizing suit you’ll ever have to deal with, but don’t judge a book by its cover. You can get some tricks out of this suit because you have the advantage of length: You have a total of eight spades between the two hands. The strength you get from numbers helps you after you drive out the ace, king, and queen.

Say you need to develop two tricks from this hopeless-looking, forsaken suit. You follow these steps: