Bridge: Setting Up a Long Suit with a Finesse

When you’re missing a critical high card in the dummy’s long suit in a hand of bridge, usually a king, you may have to rely on a finesse. A finesse involves leading from weakness to strength, trying to win a trick with a lower honor card. To pull this off, the player who plays second to the trick must hold the honor card you’re missing.

You can’t forget about entries to the dummy when setting up suits. After you set up a suit by trumping the small cards, you need to reach the dummy, where the established tricks reside, to enjoy the fruits of your labor. If you don’t have enough dummy entries to set up a long suit, forget it. You’re spinning your wheels.

Finessing in a side suit requires the following basic steps:

This image shows a suit where finessing can establish an extra trick for you. 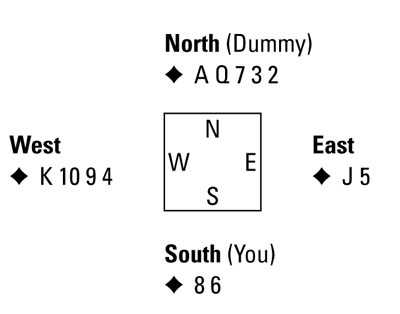 You need to take three tricks from the diamonds. Say that spades are trump, and you have high spades coming out of your ears. You want to take the finesse in diamonds, and you’re missing the critical ♦K. You hope that West, who plays second to the trick, has it.

Before you set up tricks by finessing in the diamond suit, ask yourself how many diamond cards your opponents have. Otherwise, how will you know when both of your opponents are void in that suit? Because you have seven diamonds, you can be sure that they have six.