By: Bill Kresnak and
Updated: 03-10-2022
From The Book: Motorcycling For Dummies 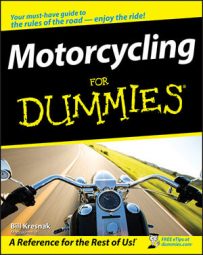 Explore Book Buy On Amazon
If you’re ready to hit the open road on a motorcycle, make sure you wear a properly fitted helmet and jacket and give your bike a thorough pre-ride inspection for maximum safety. Before you decide to buy a used motorcycle, ask some key questions to get reliable information and ride home with the right bike for you.

How to get the right fit for a motorcycle helmet

A motorcycle helmet is a sign of a true motorcyclist. Even if you don’t want to wear one, you need one. It’s the single most important piece of safety equipment you can have. A helmet has to fit well to offer the most protection and comfort, so use these tips to get a great fit:

What to look for in a protective motorcycle jacket

A motorcycling jacket is an important piece of safety equipment for a rider or a motorcycle passenger. To provide the best protection when riding, a jacket should be properly fitted. When you’re looking for a good motorcycle jacket, answer these questions:

To ensure a safe ride, you should examine your motorcycle every time you decide to hit the road. Doing an inspection only takes a few minutes and can point out little problems that can turn into some major ones through neglect.

Get into the routine of looking for the following things during a bike inspection:

Inspect a used motorcycle before you buy

When you’re looking for a used motorcycle, do some research and have a few bikes in mind that you’re interested in buying. So you don’t get stuck with a lemon, go through this short checklist and ask the owner questions when checking out the bike:

When you find something wrong with the bike, you should be able to offer less than the asking price. And don’t pay a lot of money for a bike that has been raced unless you want to race, and it has top-shelf parts.