By: Lisa Zimmer Hatch and Scott A. Hatch and
Updated: 08-27-2019
From The Book: Paralegal Career For Dummies

Explore Book Buy On Amazon
As a paralegal, you need to familiarize yourself with all the types of documents that are relevant to the practice of law. When you prepare any documents, including the demand letter and the legal complaint, you should first consult your law firm’s formbooks or document files for samples.

After you input a document into your office’s form file database, place a copy of that document into the document files for future reference.

The sample documents here follow Colorado rules, which, like those of most states, are similar to the federal rules. As a paralegal, you should consult your state’s rules to find out the precise formats that your state requires.

Format of a demand letter

You’ll find a wealth of rules, and even whole books, that have been written about proper ways to format a letter. Some paralegals prefer to follow a strict structure to be satisfied that they’re doing the work right, and plenty of material is available in bookstores and libraries to fill this need. For most paralegals, however, following some simple rules, using good judgment, and having pride in appearance will suffice. And spell-check isn’t bad either!

A good demand letter should include the following factual information:

Keep the following appearance guidelines in mind when you put together demand letters:

Follow the initials with a statement of whether there are enclosures and whether copies have been sent to others. Place these revelations underneath the initials and flush with the left margin. Here’s an example of the ending of a letter that contains enclosures with copy information (the cc used to stand for carbon copies back in the olden days before computers and copy machines; now it can stand for courtesy copies):

The following figure shows you how all these features come together in a sample demand letter to Worst Deal’s insurance company. (You can find a copy of the demand letter online.) 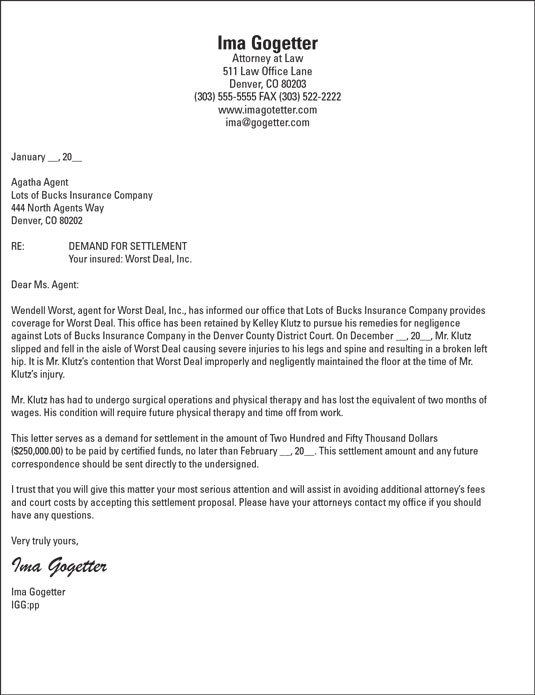 Make your case: the legal complaint

The format of a complaint (which, in some states and in certain types of lawsuits, is called a petition), varies from state to state, but all complaints should include a caption, text, and a subscription (the attorney’s signature).

Because you personally serve a complaint on the defendant, it doesn’t include a certificate of mailing (a statement certifying that you placed the document on a particular date to a specific address). You also file a certificate of personal service with the court.

The caption of a legal complaint

The caption states the court in which the action is filed, the case number, the name of the document, and the names of the parties to the action. A line on the document usually separates the caption from the text of the complaint. Each state has a specific format you should follow for the captions of legal documents.

Text of a legal complaint

The text of a complaint must include the following elements in the form of numbered paragraphs in the order that they’re listed here:

The opening statement introduces the complaint and explains its purpose. The legal community is slowly changing its format to include clearer, more precise language that omits unnecessary legalese. Old expressions such as whereas and wherefore don’t appear as often as they used to. Even the time honored introductory phrase, “Comes now the Plaintiff, by and through his attorney …” is giving way to more straightforward wording, “The Defendant, by his attorney… .”

The first numbered paragraph of the text usually identifies the parties with names and addresses and states facts to support the alleged jurisdiction of and venue for the action. For example if the plaintiff brings the lawsuit in a federal district court and relies on diversity of citizenship to give the court jurisdiction, the opening paragraph of the complaint will allege the plaintiff is a citizen of one state, that the defendant is a citizen of another state, and that the amount in controversy exceeds $75,000.

The body of the complaint asserts in numbered paragraphs statements that present the case in a logical and sequential order. There’s a difference of opinion on how much detail is needed in alleging the facts on which the plaintiff bases her recovery. The Federal Rules of Civil Procedure (FRCP) and most state rules have come a long way from the old days and require very little factual detail. The discovery process usually fleshes out many of the specific facts in the lawsuit. In a negligence action, alleging that on a certain date, at a described place, the plaintiff slipped and fell on the floor of the defendant’s business, which resulted in crushing the plaintiff’s hip, required him to seek medical help and miss work, and which also resulted in incurred expenses of a specified amount is usually sufficient.

Each paragraph in the complaint should state the allegations as succinctly as possible. A good guideline for you to follow is to include only one allegation per paragraph.

Money matters: the prayer for relief

The big finish: The subscription

In Kelley Klutz’s case, Worst Deal’s insurance company has failed to respond to the demand letter by the designated date, so Ima Gogetter’s paralegal, Pat, drafts a complaint like the one shown in the following figure. (This sample complaint is also included online.) 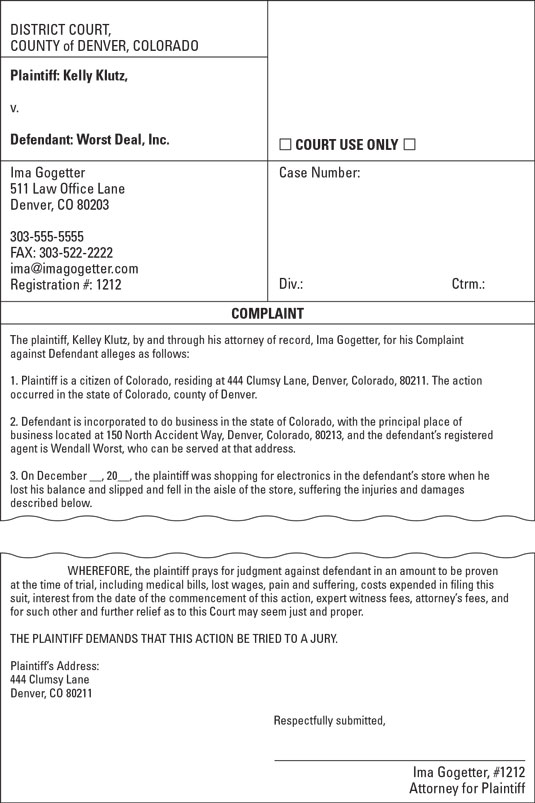 See also, "The Paralegal's Role in Creating the Trial Notebook."

Scott and Lisa Hatch are founders of The Center for Legal Studies and developed their award-winning paralegal curriculum in 1980, offering it through 600 colleges nationwide. They continue to instruct legal career and standardized test preparation courses through Hatch Education and College Primers.