Mending Misconceptions about the Koran 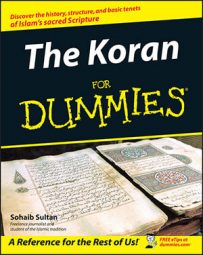 Oftentimes, misconceptions separate people with differing worldviews, presenting minds and souls with seemingly valid excuses to not engage people of other faiths. Consider these widespread notions about Koranic scripture, theology, and practice — and some enlightenment that may alter those commonly held perspectives.

As with all previous divine revelations, the Koran too was scrutinized by the community of Arabs who were the first recipients of the Book.

Those who rejected Muhammad's call to Islam argued that Muhammad was simply preaching "tales of the ancients" (16:24, for example). The Scripture responds to this demand for proof of divine authenticity by producing an eloquent form of Arabic that to this day remains unsurpassed by even the most articulate poets and writers of the Arabic language.

The Koran is so confident of its divinely inspired language that it challenges those who question the Koran's authenticity to bring all the masters of literature together to produce even one chapter that achieves the same level of linguistic eloquence as the Koran (10:37–38; 17:88).

Also, the Koran argues that if the Scripture was man-made, contradictions and omissions would crop up in the Book, rather than coherence, consistency, and completeness (4:82; 39:23).

Muslims accept the Koran's majestic literary form as a sure sign of divine revelation, especially because Muhammad never participated in the influential poetry culture of the Arabs before the revelation of the Koran.

Muhammad is even known as the "unlettered Prophet" in the Koran to indicate that he had no knowledge of reading or writing (7:157–158).

The Scripture also forcefully argues that Muhammad has no authority to change the words of God, and speaks only that which was directly revealed to him through Angel Gabriel (53:1–10).

Defenders of the Islamic tradition also argue that had the Koran been the eloquent articulation of Muhammad, he would surely have displayed the same level of eloquence in his collected sayings, known as the Hadith. While the Hadith are often beautifully worded and full of wisdom, they come nowhere close to the high literary standard of the Koran, which revolutionized the Arabic language with its eloquence.

The Koran says that God belongs to one people

The second verse of the Koran gives God a universal attribute: "Praise be to God, the Sustainer of all the worlds" (1:2). Furthermore, the Book says several times that God is the Lord of the East and the West (73:9, for example).

The Scripture teaches that all prophets throughout history form a single community of brotherhood under the Lordship of God alone (23:51). The Koran teaches His universality as the Sustainer of not only every human being, but of all the universe, including animal life, plant life, all the constellations in the solar system, and so on.

God is wrathful and unloving in the Koran

After declaring God's universality, the Koran describes God as "most Merciful, most Compassionate" (1:3). In fact, every single Surah except one begins with this declaration about the divine nature.

Without doubt, the Koran also mentions God's wrath for those who reject faith after clear signs have come to them, and upon those who are bent on spreading evil and corruption on earth. But, as Prophet Muhammad said while quoting God himself, "My Mercy prevails over My wrath."

In the context of the Koran, Jihad means the struggle for good against all evil. This struggle also includes the suppression of the lower self in order to reach a state of higher God-consciousness that leads to a pure soul.

Jihad can take place in many forms, including speaking out against injustice or spending your wealth in the cause of public good, such as alleviating poverty. Jihad does also include armed struggle, which at times becomes necessary in order to protect the weak and to establish freedom of religion. (Jihad in the context of armed struggle is known as Qital.)

Critics of the Koran love to quote passages such as 9:5 of the Koran, which calls for taking up arms against those who ascribe partners with God. Most often, these critics fail to recognize the context of such passages. Cutting and pasting verses out of their context to lend credence to an argument clouds the more important overall picture.

All verses in the Koran that deal with armed struggle advocate the use of force only for self-defense in the widest sense possible, such as freeing the oppressed and establishing the freedom of worship.

The Scripture clearly says that fighting in the path of God does not include converting people by the sword. The Koran emphatically declares, "Let there be no compulsion in religion" (2:256).

All legitimate scholars recognize this essential ethic as one that Muslims must abide by, even during times of war.

Some people view verses about women in the Koran outside of their context, giving rise to misunderstandings about the status of women. Another problem is that the Arabic words used in the case of sensitive marital issues are very sophisticated terms that are more often than not mistranslated in the English language.

The Koran, in fact, argues that women are completely equal to men in the sight of God, and that both men and women will be rewarded solely according to their deeds, and not due to any sort of preference for one gender over the other.