Having a Chat with God

By: Richard Wagner and
Updated: 05-12-2016
From The Book: Christian Prayer For Dummies 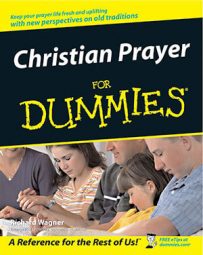 Prayer is simply communicating with God. There's nothing magical at all about Christian prayer; it's matter of fact.

However, Christian prayer is more than just telling God your list of requests and expecting him to answer your prayers like he's some kind of cosmic vending machine. Yes, prayer is a way to share with God what's on your mind. However, even more important, it's a way to get to know God and what he wants to do in your life and in the world.

When you study the Bible, you find people praying left and right, but the subject of prayer itself is actually rarely addressed. A filled ball is essential to playing basketball, but it's also so obvious that nothing need be said about it. In the same way, prayer, or talking with God, is so natural that it's a given in the Bible.

Although the Bible doesn't talk specifically about prayer methods, you do notice that the manner in which people prayed has changed through the ages. In the earliest of times, people like Adam, Noah, and Abraham prayed in a very familiar and direct manner to God and tended to focus on the practicalities of life. But from the time of Moses through the rest of the Old Testament period, prayers tended to be more formal and less focused on personal needs and more on national issues related to the Israelites.

Christian prayer has its origins in the prayers of Jesus, particularly the Lord's Prayer. Christian prayer in the New Testament becomes more focused on the spiritual needs of individuals, such as the cleansing of sins, physical healing, and equipping of individuals with spiritual qualities to live like Christ. Prayer in the New Testament is also quite intimate and even goes so far as to tell you to call God your Daddy.

Nowhere does the Bible list any specific rules on how to pray. Protestant, Catholic, and Orthodox Christians each have their own distinct traditions of prayer. The refreshing and liberating fact is that God is not much concerned with how you pray; he's more interested in what you pray about and what your attitude is while you pray.

Surveys of U.S. adults and teenagers by Barna Research Ltd. from 1991–2001 revealed the following statistics about people's prayer habits:

Richard Wagner is founder and writer of Digitalwalk.net (www.digitalwalk.net), a Web-based commentary with the purpose of challenging and encouraging Christians to earnestly live out their faith in a digital, postmodern world. Richard has served in church leadership and teaching roles for more than a dozen years. He lives in Princeton, Massachusettes, with his wife and three boys. You can e-mail Richard at [email protected].

For a study guide and discussion questions for Christian Prayer For Dummies, visit www.digitalwalk.net/prayerdummy.