9 Ways to Avoid Heartburn While Pregnant

By: The Experts at Dummies and
Updated: 09-03-2021
From The Book: Pregnancy All-in-One For Dummies 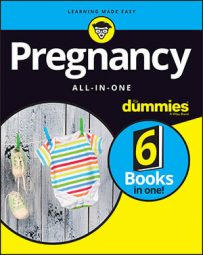 Explore Book Buy On Amazon
Heartburn is common during pregnancy and can happen at any time throughout your 40 weeks, although it often gets worse in the second and third trimesters. Heartburn has two causes, and both are related to the sphincter muscle that connects the esophagus to your stomach. The progesterone your body produces relaxes that sphincter muscle, and your growing uterus presses on it.

The result is that gastric acids, liquids, and food from the stomach travel back up your esophagus, leaving you uncomfortable. Heartburn typically worsens as your belly grows and puts more pressure on your stomach, causing the sphincter muscle to allow acid back into the esophagus.

You can lessen the symptoms of heartburn by trying the following tips: