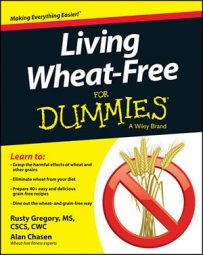 Say the words whole grain, and most people immediately think “healthy.” That response is so ingrained (pardon the pun) in conventional wisdom that accepting a wheat-free lifestyle has to begin with a huge paradigm shift. Whole grains such as wheat are in no way healthy.

The United States Department of Agriculture (USDA) suggests six to eight servings per day of grains, with half of those coming from whole grains. Although most Americans still aren't reaching the whole-grain goal, whole-grain consumption has increased since the ’90s. Yet diabetes and heart disease continue to be on the rise.

Take a look at wheat's nutritional content and the substances in wheat that can harm the body.

Whole grain consists of three parts: the bran, the germ, and the endosperm:

Refined grains are what you get when the bran and germ are removed. Refining grains mills away most of the nutrients and fiber. Manufacturers enrich these foods to try to replace the lost nutrients, but they can't replace the fiber.

That's why whole-grain foods are often advertised as being better than refined grains; many people assume the higher nutrient and fiber contents in whole grains are healthier. But fiber from wheat and other grains comes with its own health issues.

The grains you eat are actually the seeds of the plant. The plant needs to propagate, but spreading its seed is much more difficult if an animal eats the seed before it can grow. Some plants, like roses or cacti, grow thorns to ward off predators.

Wheat, on the other hand puts up a defense by creating substances called lectins that are toxic or antinutritional (inhibit nutrient absorption) to the creatures that eat it. (Don't confuse lectin and leptin. Lectin is found in plants and animals; leptin is a hormone in the body.) The seed passes through the digestive system intact, for the most part. After it passes out of the body, it survives to live another day.

Lectins are found in almost all plant and animal products in various amounts. Some of these include seeds, legumes, dairy products, potatoes, and tomatoes. Wheat and all other grains tend to have the highest concentrations.

Lectin in wheat is particularly problematic because it's in the form of wheat germ agglutinin (WGA). This form, mostly concentrated in the seed, is able to withstand processes for combatting antinutrients (sprouting, fermentation, the general process of digestion, and so on). WGA is so tough, in fact, that its molecular structure is the same as human hair and vulcanized rubber!

WGAs are very small, and their tendency to accumulate in all types of tissues causes wide-ranging negative health effects, including (but not limited to) the following:

WGAs aren't always the main cause of a disorder, but they're dangerous because of their ability to exacerbate a disease that is already present. The bottom line is to remove wheat or even all grains from your diet.