The Role of Vitamin D in Preventing Ovarian Cancer

Ovarian cancer may arise in the ovaries, oval-shaped organs found in pairs in the female reproductive system. Studies suggest that vitamin D plays a role in preventing and treating ovarian carcinoma. In 2009, about 21,550 cases were diagnosed and 14,600 women died of ovarian cancer in the United States. Ovarian cancer is usually a cancer of women older than age 60.

Within the ovaries, eggs are produced, along with estrogen and progesterone. The following diagram shows the location of the ovaries. 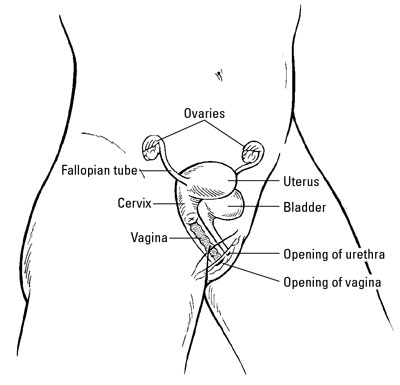 Location of the ovaries and other female reproductive organs.

Factors that decrease the risk for ovarian cancer include use of combined estrogen/progesterone oral contraceptives and contraception by tubal ligation (tying off the fallopian tubes).

Ovarian cancer is associated with a number of signs and symptoms, but none that are specific to ovarian cancer. Consider the most important:

Ovarian cancer isn’t usually diagnosed in its early stages because it tends to cause symptoms that aren’t specific to the disease. When ovarian cancer is suspected, a pelvic examination and CT scan can diagnose it. A definitive diagnosis requires a biopsy of the mass in the ovary.

Treatment of ovarian cancer starts by surgically removing the ovary and fallopian tube. If the cancer has spread, chemotherapy is added to the treatment. Radiation therapy isn’t usually used because the ovaries are located near other vital organs.

The prognosis for ovarian cancer is poor because the diagnosis is generally made so late in the disease. Complications that may occur include fluid in the abdomen, intestinal obstruction, and spread to other organs. The five-year survival rate is 45 percent.