How Vitamin D May Protect Against Prostate Cancer

Prostate cancer is the most common cancer in men in the United States. Some scientists think vitamin D may help protect against prostate cancer. Prostate cancer generally occurs in men over the age of 50; however, it is slow growing in most men and takes a lifetime to develop.

Prostate cancer has been found in the prostate gland of more than 80 percent of men over the age of 70 who died from an entirely unrelated disease. Some doctors are concerned that the major test for detecting prostate cancer, the prostate specific antigen or PSA test, is overused. Its major weakness is that it not only picks up prostate cancer, but it also detects another prostate condition that isn’t cancer called benign prostatic hypertrophy (BPH).

Unfortunately, when men get a positive PSA test, many of them may have had radical prostatectomy (surgical removal of the prostate) and then suffered from problems with erections and urinary incontinence.

Dr. Richard Ablin, who developed the PSA test, thinks that prostate cancer is a disease that many men can live with and that can be managed. They’re concerned that the side effects of prostate cancer removal (prostatectomy) aren’t worth it.

Prostate cancer occurs in the prostate gland, a tiny gland that surrounds the urethra, the tube that carries urine and semen through the penis out of the body. The prostate is only 20 grams in size, and its function is to make seminal fluid to carry sperm from the testicles. The following figure shows the location of the prostate gland. 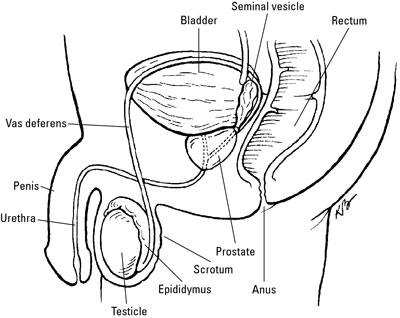 The location of the prostate and other male reproductive organs.

Prostate cancer is linked to many risk factors beyond gender, including the following:

Most prostate cancers cause no symptoms, but when they’ve grown to become clinically important, they may cause these issues:

These studies suggest that higher intakes of vitamin D could protect men from prostate cancer. Unfortunately, when researchers have looked for a relationship between serum 25-hydroxyvitamin D and the risk of prostate cancer, the results have been confusing.