Teeth aren’t exactly bones, but they’re made up of similar tissues and are subject to the same problems bones may have. Vitamin D deficiency, including the conditions of rickets and osteomalacia, also can affect teeth.

Exploring the normal development of teeth

A tooth consists of a top part called a crown, made of enamel. Enamel is made up of calcium phosphate and is the hardest substance in the body. Under the crown is supporting dentin, which is mineralized tissue that isn’t as hard as the enamel. Within the dentin is the pulp of the tooth, which contains the nerves and blood vessels for the tooth.

The tooth continues down into its bony support of the jaw and skull as one or more roots, which are covered by cementum. Cementum is another mineralized tissue that is softer than dentin or enamel. Cementum permits the tooth to attach strongly to the bone. Where the crown of the tooth meets its supporting bone, it’s surrounded by soft tissue called gingiva, or gums. 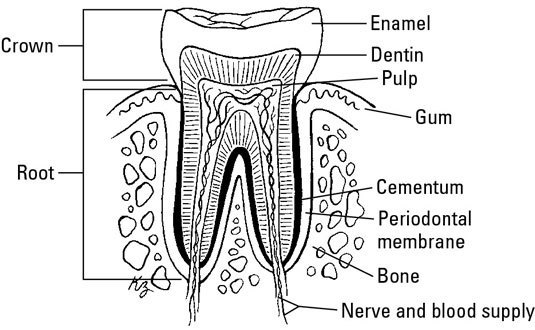 The parts of a tooth.

Rickets, a condition resulting from inadequate mineralization of all the bones, can have a negative effect at every stage of the development of teeth. The primary effects of rickets include the following:

Osteomalacia, a severe vitamin D deficiency that develops after the bones have been formed (in adults), can result in all these abnormalities as well. The teeth are painful, deformed, and subject to increased cavities and periodontal disease. They may be lost early.