By: American Geriatrics Society (AGS) and Health in Aging Foundation and
Updated: 09-10-2016
From The Book: Staying Sharp For Dummies

Test your logic and reasoning

The figure shows a common task that instructors give to psychology students to test their logic and reasoning skills. You see four cards, with only one side showing. 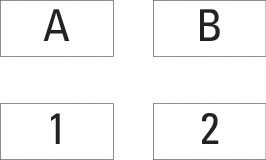 If you're still puzzling over this, don't worry. Most people find this test very difficult. Try this version.

Here's the rule: If you're under 21, you can't drink alcohol.

You're the bartender and you have to make sure that no one breaks this rule. This figure shows what you see at one table. 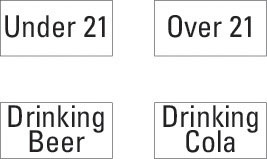 A reasoning test with a bartender.

Whose age will you check? You'll probably check the first person who looks under 21. And you'd also check the person drinking beer to make sure that he's 21 or over. You aren't worried about the person drinking cola because it doesn't matter whether he's older or younger than 21; cola isn't an alcoholic drink.

These kinds of tasks aren't meant to frustrate psychology students (though they may do that too!) but to illustrate how people use logic and reasoning in everyday situations. In the scenario with the drinks, you can save time by checking only certain people's ages rather than checking everyone's age.

Use your reasoning skills to the max

Life presents you with many opportunities to recognize patterns and use your reasoning skills to their full potential.

Here are some suggestions that can help you strengthen the patterns and associations you may need daily:

The American Geriatrics Society (AGS) is a nationwide, not-for-profit society of geriatrics healthcare professionals dedicated to improving the health, independence, and quality of life of older people.

The Health in Aging Foundation is a national non-profit organization established in 1999 by AGS to bring the knowledge and expertise of geriatrics healthcare professionals to the public.