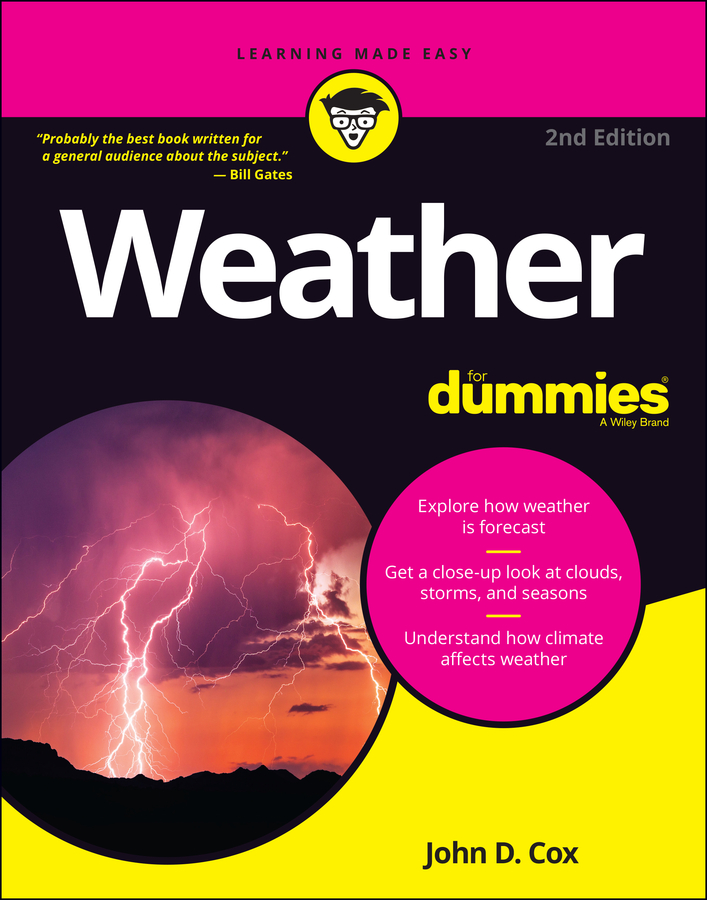 Just when you think you've got the seasons in your area all figured out, along comes a winter that is nothing like what you expect. Around the country, around the world, everything seems to be upside down. Places like Seattle that are accustomed to cool temperatures and a lot of rain instead get warm, dry weather. Places like sunny southern California, the Southwest desert, and even the southeastern United States get cold temperatures and heavy rain. In the usually cold Northeast, it doesn't even feel like winter. And it snows in weird places like in Guadalajara, Mexico.

Cold temperatures and rain befall the usually dry deserts, and warm dryness comes to the usually cool forests of North America, South America, and much of the rest of the world. The important thing is not that there is more hard winter weather around the world during El Niño — although during a big El Niño, a grande El Niño, there certainly seem to be more storms. El Niño's "Bad Boy" reputation as a natural disaster comes not from extra storminess, but from the fact that it puts storms in places that can't handle them so well.

Is El Niño a bad boy?

Is El Niño really bad news? It all depends on where you live. A powerful El Niño is terrible news to people in Ecuador and Peru, for example, who often face deadly floods in their steep desert terrain. It's not much good to southern California either, and for the same reason — the desert soil can't absorb much water, so the rains bring on floods and mud slides. But the folks in Seattle and western Canada don't mind a mild winter once in a while. In the northeastern United States, often El Niño means milder winter temperatures and less snow than usual — less hardship and a welcome savings on winter heating bills. And for people across the Gulf States and the Eastern Seaboard, El Niño does one really good thing in the Atlantic Ocean in the summer and fall. It generates powerful high-altitude winds that cut the tops off of tropical storms before they can grow into hurricanes.

Good or bad, scientists say that, aside from the seasons themselves, El Niño is the most powerful climate force on Earth. So this is a big part of the big answer to the little question: Why is one winter different from another? It's not the only reason, of course. But if one winter is very different from normal — almost the opposite of what you would expect — take a look out in the tropical Pacific Ocean.

If El Niño is out there, as it is in Figure 1, the Pacific Ocean has a very different look. The Warm Pool and the big thunderstorms have moved. Instead of up against south Asia, they are spread out into the middle of the Pacific or even far over on the other side of the ocean, up against the coast of South America. All kinds of big changes are taking place. The tradewinds have completely pooped out and may even be blowing in the opposite direction. The Cold Tongue is a goner, and in its place is extra-warm water. Take a look at the jet stream, the storm track. Instead of looping around like it normally does, it is so strong that it carries storms straight over the Pacific Ocean and across the Southwest and the southern United States. 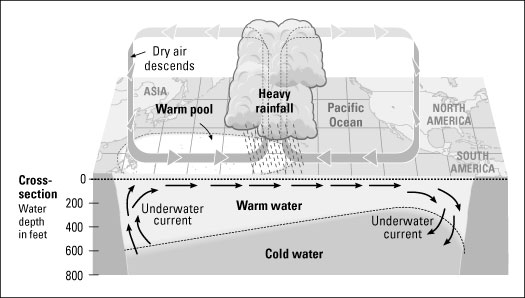 Figure 1: Features of El Niño across the tropical Pacific.

These important season-changing conditions — the Warm Pool and the big thunderstorms and the winds — seem to swing back and forth from one extreme to another across the tropical Pacific Ocean. On average, every three to seven years El Niño seems to come along. But "average" and "normal" are not very good words to use with things like El Niño. Like a lot of things about weather, "average" and "normal" don't seem to come around very often. The swings from especially warm to especially cool Pacific Ocean conditions are not regular, and their pattern is not reliable.

Some climate experts at the Go Figure Academy of Sciences and elsewhere have been trying to make a computer model that acts like the Pacific Ocean, swinging between warm and cool, so that they can predict when El Niño will show his face. But they're not very good at it yet. On the other hand, scientists have become very good at using new tools like satellites and buoys moored across the ocean to detect changes in the temperature of the water and in the winds. So once El Niño conditions begin to take shape, they can see them sooner. If you live in a region that feels El Niño's effects, this means that some years climate experts may be able to warn you months in advance about what kind of winter to expect. Figure 2 shows the patterns of global weather that are linked to a powerful El Niño. 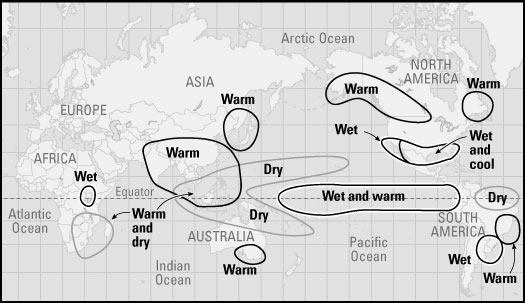 El Niño causes some serious weather problems around the world, no doubt about it, but La Niña, which Figure 3 illustrates, is not exactly a sweet little thing either. In places like the northeastern United States that are accustomed to cold and snowy winters, La Niña often makes for especially hard winters. In the rainy Pacific Northwest, La Niña winters seem to bring even more rain and snow than usual. 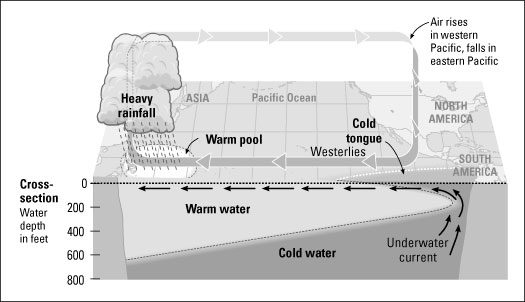 Figure 3: Features of La Niña across the tropical Pacific.

Across the desert Southwest, often the season is even drier than normal. Tornadoes seem especially numerous during springs and summers of La Niña, and the Atlantic hurricane season can be especially long and dangerous. In 1999, for example, while La Niña conditions prevailed in the tropical Pacific Ocean, 12 tropical storms grew big enough to earn names, eight of them became hurricanes, and five became intense hurricanes.

Like a lot of brothers and sisters, El Niño and La Niña don't get along together. In the tropical Pacific Ocean, they are opposites. If you have one, you can't have the other. In the ocean, the uppermost layer of warm water — which flattens out during El Niño — now has an especially sharp wedge-shape to itself during La Niña. It is thick up against South Asia, where the Warm Pool is especially deep. Above the ocean, the tradewinds are especially strong. And on the opposite side of the ocean, up against South America, because of the strong offshore winds, the warm surface layer disappears altogether. The deeper cold water is flowing directly up to the surface for a great distance along the Equator. This means that the Cold Tongue is sticking out far into the sea.

La Niña impacts on the world's weather are less predictable than the effects wrought by El Niño. This is mainly because of the big differences in the jet stream and the storm track. El Niño causes the Pacific storm track to become stronger, to drop farther south than usual, and to straighten out like a necklace of weather extending more-or-less straight across the ocean. The La Niña storm track is weaker and loopy and irregular, like a piece of wet and wiggly spaghetti, more changeable — so the behavior and direction of the storms it carries are more difficult to accurately forecast (see Figure 4). 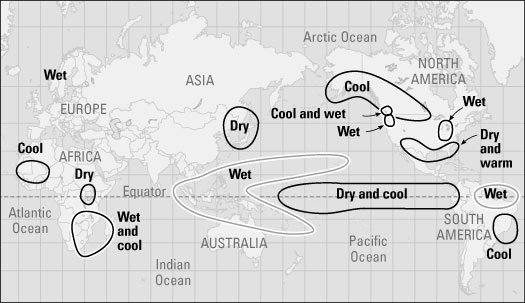