Fine-Tuning Your Acting Performance on Film 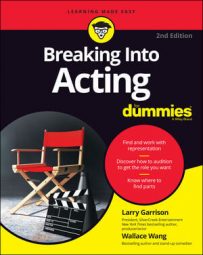 Acting for the camera

In film and television acting, you often don't have the luxury of a live audience giving you feedback of any kind. Instead of a theater full of people, your audience is just a camera, the camera operator, the director, and any sound, light, and makeup technicians who happen to be standing around at the time. This means that you need to use your imagination and pretend that the cameraman staring at you is actually your long-lost lover, or that the stern look on the director's face is actually the friendly face of your best friend. When you play to the camera, you have to project emotions to the unblinking eye of the camera.

To help you "play to the camera," keep these ideas in mind:

Watch a television show or movie on video with the sound turned off. Without any dialogue to guide you, can you guess what the actors are trying to say to each other? Body and facial gestures can convey more information to an audience than you may think. By studying films or television shows with the sound off, you can study how gestures can help (or hinder) an actor's performance on-camera.

Videotape yourself performing a monologue and look for inconsistent actions that detract from your character. For example, if you're portraying a tough, confident business-person, twirling your hair around your finger and biting your lower lip probably isn't going to support your character portrayal. Ask your acting coach or instructor to watch your videotape and comment on the type of character that he or she thinks you're portraying. If you think that you're portraying a tough guy but your acting coach thinks that your portrayal represents a timid character, you may need to work on your acting skills so that you can portray different types of characters consistently and accurately.

Because everything you do in front of the camera is captured on film or videotape, you just have to deliver the best possible performance once and that's it, right? Wrong. In the world of film and television, you don't just perform a scene once. You perform the same scene over and over again, so the director can capture that scene from different angles, or so the actors can try different variations on their acting. The same scene may be shot three or four or ten different times.

If a director wants to shoot the same scene over and over, don't take it personally as if you're doing something wrong. Sometimes, the director just wants to capture several different versions of the same scene, so he can choose the best one to use later. Actor John Ritter once did a commercial where he had to kiss a woman on the beach, and the director made him do it over and over and over again. John Ritter couldn't understand what he was doing wrong, so he asked the director. The director told him that he wasn't doing anything wrong. The director just wanted to capture the different appearances of the sunset in the background.

To maintain consistency from take to take (a take is a short scene that is captured on film or videotape), you have to be aware of continuity each time you perform a scene on camera. (Continuity means making sure your body movements and appearance are identical in every take.)

From an actor's point of view, the problem with shooting the same scene over and over again is that the actors never know which scene (or parts of each scene) will ultimately be used, so they need to be consistent in appearance, movement, and acting in every scene. Part of the first scene that they filmed may possibly be used followed by part of the last take of that same scene and ending with part of the fourth take of that same scene. When viewed one after another, the different mish-mash of scene takes need to blend together seamlessly as if the camera recorded the whole scene at once from start to finish.

When doing multiple takes, you need to know the difference between acting and action. Acting deals with how you portray a character, while action is what you do with your body and any props. When shooting another take, subtly altering your acting is okay, but make sure that your actions remain exactly the same.

To see how well you can maintain consistency in front of the camera, videotape yourself and a fellow actor performing a short scene. Shoot the scene three or four times, and if you have a video editing program for your personal computer (such as iMovie found on the iMac), you can mix and match different parts of each take together. Does the entire scene appear to have been filmed at the same time, or can you notice any glaring differences between parts of the scene (such as your hand resting in your lap in one scene but not in another)? If you notice glaring differences, you may need to work on being more consistent when performing in front of the camera, whether it's the first take or the twenty-third take.

Successfully acting scenes out of order

Besides maintaining continuity throughout multiple takes of the same scene, you also have to worry about continuity between different scenes. For financial reasons, film and TV shows are often shot out of order. For example, if a film opens and ends with a scene on the Golden Gate Bridge in San Francisco, the director has two choices: Not surprisingly, most directors opt to save money and shoot scenes out of order.

As a result, on your first day on the set, you may possibly shoot the last scene of the film. Then on the final day on the set, you may shoot the first scene. If your character is supposed to be timid and shy at the beginning of the film but aggressive and domineering by the end, your acting must reflect these characteristics. If you fail to act appropriately in a scene, your character won't make any sense when someone views the scenes in their correct order.

(Many actors mark up their scripts with notes for how their character should be acting and feeling in every scene. That way, when director shoots a scene out of order, the notes in the actors' scripts can remind them how to portray their characters accurately.)

Videotape yourself and your fellow actors performing three consecutive scenes from a play. Now perform and record the last scene, take a 10-minute break, record the first scene, take another break, and, finally, record the middle scene. Rearrange these recorded scenes (by using a video editing program on your personal computer, such as iMovie on an iMac) and play them in order. Do the three scenes appear to flow as if they really did occur one after another? Or does the acting appear jumpy and inconsistent from one scene to the other? If your acting is inconsistent between the different scenes, you may need more work acting in front of the camera.