By: Scott Speck and Evelyn Cisneros and
Updated: 01-24-2017
From The Book: Ballet For Dummies 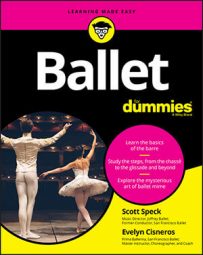 Explore Book Buy On Amazon
The first ballet exercise at the barre is the small knee bend, or demi-plié ("duh-MEE plee-AY"). This article shows you how to perform a demi-plié from first, second, fourth, and fifth positions.

When you do a demi-plié, you bend your knees as far as you can while still keeping both heels planted on the ground. That little caveat is the key. It means that the depth of a demi-plié varies a little for every single dancer — as you're about to find out. Your challenge now is to execute a demi-plié in four of the basic positions.

Stand at the barre in the starting position — but with one exception: Bring your legs into first position. Turn your feet out only as far as is comfortable.

From here, slowly bend your knees as far as possible, while keeping your heels on the ground, with your knees directly over the middle of your feet. While you descend, your lower right arm (from wrist to elbow) moves outward and slightly up, no higher than the level of your hips. This beautiful motion gives you the illusion of floating (Figure 1a).

Your arms and legs should always arrive at their finishing positions together.

Congratulations — you have executed a bona fide demi-plié. Repeat it four times. And now, as much fun as this is, it's time to move on.

In switching from one leg position to the next, you have unwittingly accomplished a very tricky, yet essential, ballet move, called a battement tendu ("bat-MAHN ton-DUE" —literally: "stretched out"). You can read much more about this move later in this chapter.

Now lower your right heel and transfer your weight evenly to both legs. Your heels should be in line with one another. Ideally, the distance between them should equal the length ofyour own foot; but the move is a little easier with the feet a bit farther apart than that.

Now that your legs are in second position, do a demi-plié.

Bend your knees slowly, keeping your upper body straight, and lower your hips halfway down to knee level (refer to Figure 1b). Don't stick your rear end out. As you descend this first time, lower your right arm. Now straighten your knees, but continue to lower your arm.

Now repeat this demi-plié any number of times, moving your right arm just as you did for first (leg) position.

You may have noticed that we skip third position, and there's a reason for that. It's safe to say that nobody ever does demi-plies in third — except by accident.

From second position, begin by pointing your right foot. This time, draw a quarter circle on the ground, from the side to the front, without moving your hips. This is called a demi rond de jambe ("duh-MEE ROND duh JAHMB") — literally, a "half round of the leg." (Yeah, yeah, we know — we call it a quarter circle, the French call it a half. It's art. Give us a break.)

Keep your right heel turned out as much as you can, within the realm of possibility. Lower your right heel in front of your left, about a foot in front. (Again, the distance ideally equals the length of your own foot.) Meanwhile, bring your right arm up through middle fifth position and open it out to second position. Check to make sure that the weight of your body is evenly distributed over your legs. You are now in fourth position.

Now for the demi-plié. Once again, bend your knees as far as possible with your heels firmly on the ground. Make sure that your knees are pointing outward and are placed over the middle of your feet. Move your right arm as you do in the demi-pliés in second position (Figure 2a).

Concentrate on keeping your hips parallel to the front, without twisting — easier said than done.

Even in the unlikely event that you were born with mega-turnout, don't try to press your right foot flat against your left. A move like that can damage something important — your knees, for example.

In fact, your fifth position may stay "open" for years. It takes a long time for a dancer's hips to loosen up enough, and the muscles to strengthen enough, to hold the ideal position. Patience, young grasshopper.

Okay now — time for the demi-plié. All the same rules apply, and the arm movements are the same in second position (refer to Figure 2b). Because of the strange contortions involved, the demi-plié in fifth position is the shallowest bend of them all. But perseverance pays off.