Transitioning In and Out of Head Voice while Singing 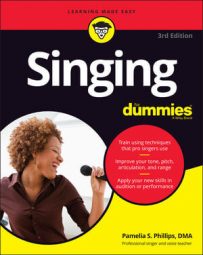 Ascending to head voice while singing means that you have to let go of the thick weight of chest voice or middle voice and lighten up the sound. You may have to go overboard at first to lighten the sound without squeezing your throat. The key is to feel the sound vibrating higher in your head.

Taking the middle voice too high keeps the head voice from getting its fair share of the workout. It also strengthens your middle voice while weakening your head voice. The transitions in your voice also become more difficult if you try to push a middle voice sound too high.

The transition notes won’t be dependable because you’ll try to sing them heavy, and maintaining that heavy sound can be tricky. You can make a choice of when to change to head voice in a particular song, but in the exercises, you want to keep the head voice strong by switching as early as possible.

Work the exercise in the following illustration to help you feel the transition from middle voice to head voice. Notice that the pattern has rests in it for you to detach the notes. Make sure that you transition into head voice instead of carrying up middle voice. Notice, too, that the vowels are laid out so that your sound is thicker at the bottom and gradually lightens as you ascend.

In the following pattern, you start on the high note of the pattern and work your way to the bottom. Find the spinning feeling of head voice on the first note, and gradually let the sound grow thicker as you descend.

You may even feel the sound moving from your head to your mouth or your neck as you descend. That’s just fine. The pattern starts slowly and gradually gets faster. Take your time. You may need to repeat the first few slower patterns to get accustomed to making the transition before you tackle the faster patterns.