When you see at least one flat, you can always assume that nothing is sharp. You’ll never see both flats and sharps in the key signature.

The order that you’ll always see flats in is B, E, A, and D. Yes, that spells a word! So if you see three flats in the key signature, it refers to B♭ó, E♭, and A♭.

If you see a B♭ note, you don’t play it in the B finger position. Instead, you play it a half step lower than where you play the normal B note.

This goes for any B♭ position on the fiddle, including one on the G string (low 2 on G), one on the A string (low 1 on A), and one on the E string (low 4 on E). These three spots each represent a B♭ note and are a half step lower than normal B.

When you see one flat in the key signature, it always changes the letter B from B natural to B♭. This affects three different notes compared to playing in C major on the fiddle. 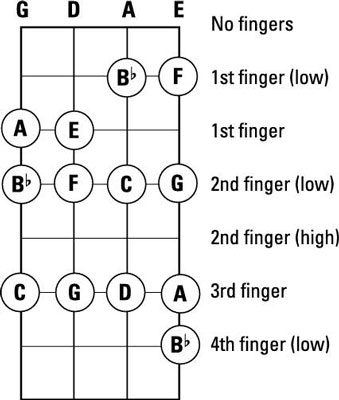 Now the B’s are located in a different spot than the natural position of notes in C. All the B’s are B♭ because of the key signature, which means that all the A’s and B♭’s will touch.

Here are some other things to note:

You need to be aware of a couple of things when you start playing in this key signature. It’s very easy to dip your hand back and move your wrist to find some of these notes, which will pull your hand out of position. This won’t happen in sharp keys, but make sure you’re especially aware of it in flat keys. 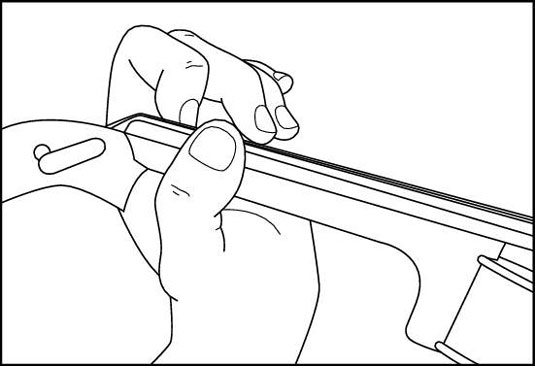 This finger position with your 1st finger allows your hand to stay in the same position so that you don’t have to make the unnecessary movements to find notes after the low 1. Doing this properly helps you play fast on the fiddle and play more in tune.

Adding another flat to the key signature would put you in the key of B♭. It’s important that you realize that the key is B♭ó and not B, as B major has five sharps! 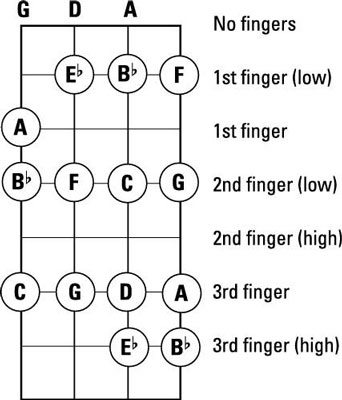 When you see two flats in the key signature, the second flat is E♭. This means that all the regular E note positions on the fiddle are now a half step lower than normal. Now the finger squeeze is applied to the 1st finger on the D string.