How to Play the Strathspey with Scottish Snaps on the Fiddle

The strathspey is a dance tune in 4/4 meter that usually includes the Scottish snap. Many times it occurs on the fiddle in a major key. The strathspey is a type of reel, but played much slower. However, some styles, including the Cape Breton style, play strathspeys much quicker.

One of the most common rhythms used in Scottish fiddling is the Scottish snap, also called the Lombard rhythm.

Scottish music has a lot of Scottish snaps.

You may have trouble playing the 16th notes fast enough. It’s all about having a relaxed hand and not forcing the fast notes with your big muscles. Remember not to use your big muscles. This is important to be able to do the Scottish snap most effectively.

You can put the Scottish snap into the strathspey style with “Boyne Strathspey.”

If you’ve never played the dotted eighth rhythm before, this song will be hard for you. If the rhythm isn’t hard for you, try to put the harshness into the notes. You can lift the bow off the strings and land harshly, especially when you’re playing beat 1 of each measure. 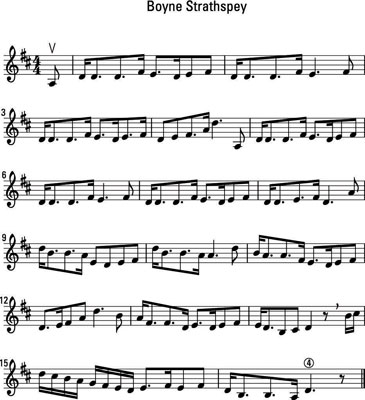