How to Play the Irish Polka on the Fiddle

One type of dance music you can play on the fiddle, which focuses on couples dancing, is the Irish polka. This kind of music is a little bit different from jigs regarding where the accents lie and also the time signature, which is typically 2/4. Check out where these accents should be when you see four consecutive eighth notes. 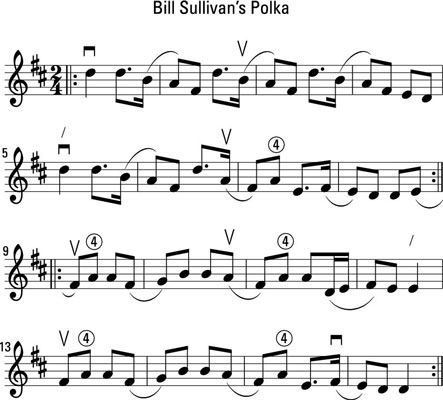 Accenting the sound of music on the off-beats is simple when you have a simple eighth note pattern, like four eighth notes in a row. In this situation, you would accent the second and fourth beats by moving the bow quicker than normal with your index finger.

Now try to think about the timing when you accent these eighth notes (on beats 2 and 4). If you replace the measure with a quarter note to start (like in “Bill Sullivan’s Polka”), you would accent at the last half of the quarter note instead of the beginning. This gives the polka a danceable feel!

The first half of the quarter note – Played normal

The second half of the quarter note – Accented

So the speed of the bow will start going normal speed, and then in the same bow stroke, you would speed up the second half to create an accented sound.

Listen to a fiddle accenting on the second half of a quarter note. You can try to imitate this sound. Now, listen to a breakdown of how to do this accent in the first measure of “Bill Sullivan’s Polka.”

In Irish music, it’s often appropriate to slide into notes. This is normally done on just a few select notes that are typically longer in length. Notice the slide markings on the quarter notes in the song.

Now listen to the beautiful “Bill Sullivan’s Polka” in its entirety.