How to Play Scottish Jigs on the Fiddle

Today, jigs are associated more with Irish fiddling than with Scottish fiddling, but that wasn’t always the case. Jigs in the early 17th century were an important part of Scottish fiddling. Jigs are lively, energetic tunes typically written in 6/8 time. They can also be written in 9/8 time; these are known as slip jigs.

Jigs have a pattern of groups of eighth notes, with each group containing three eighth notes. The first note of each group of three is accented or emphasized. However, the notes are still played evenly. You may also notice other ornamentations used, such as grace notes.

An Irish jig is a song in 6/8 time where beats 1 and 4 are emphasized. Scottish jigs are similar, except the bow patterns are a little different, and they typically have more ornaments. Take a look at “The Jig of Slurs.” 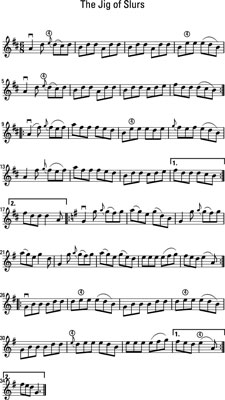 Try to play the grace notes as fast as you can. Remember, you can add them in anywhere; playing the fiddle is all about embracing your own style. The pattern of slurs is only a suggestion; you can do more or fewer if you prefer.

Don’t get ahead of yourself trying to learn the ornaments until you have a solid foundation of the notes. Eventually, the more you play this piece, the faster you’ll get. And this piece goes very fast!

Now listen to “The Jig of Slurs” played at a moderate speed.

Notice how beats 1 and 4 are emphasized in this tune. That’s very important to get the jig feeling in a song, and the Irish style follows the same concept. Remember, it’s all about controlling your index finger.

Another song you can play is a jig called “Cock o’ the North.” This song is a bit tougher, with a larger variety of rhythms and slurs. 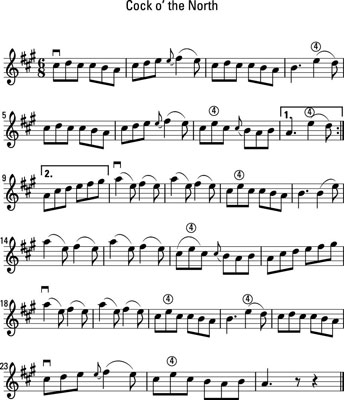 Now listen to “Cock o’ the North” and see whether you can imitate the sound that’s made with the ornaments. Can you tell it’s a little bit different from the Irish-style sound?