How to Play Major Chords on the Violin

By: Katharine Rapoport and
Updated: 03-26-2016
From The Book: Violin For Dummies

Major chords are a great starting place for beginning violinists. Budding rock stars playing in their parents’ garages may not have formal musical training, but they still manage to make music— or something pretty close, anyway. Beginners create harmony by very simple means, using chords known as primary (or principal) triads. Primary triads of any key, particularly the one you’re playing in at the moment, are the ones that are most important.

You make a triad in the same way that you make an arpeggio: Combine the starting note, or root, with the third and fifth note above it. These three notes played at the same time form a chord.

You don’t have to be a punk rocker to use these chords, either. Primary triads are also very useful to violinists because they work to accompany just about any folk song, or melodies taken from more popular music.

Musicians use three primary triads for each key. To find each type of primary triad, locate the tonic (I), subdominant (IV), and dominant (V) note of its scale.

Musicians measure intervals by counting how many notes you pass by in the scale you’re using before you actually sound the next note. Musicians count the starting note as number 1, and they keep on counting until they reach the new note.

Actually, D major makes the best key for violinists to start using their harmonies, because they can play the root (the lowest note) of each chord of D major’s primary triads, I (D), IV (G), and V (A) on an open string. That’s why so many fiddle tunes are in D major! Here are the triads in D major.

A trick that fiddlers use to play the primary harmonies in D major is to bow on two open strings together. You can bow the D and A strings at the same time to get a strong impression of the I chord. You can represent a V chord by playing similarly on the A and E strings, and you can represent a IV chord by playing similarly on the G and D strings.

In major keys, the primary triads are also major.

Breaking out in chords

Sometimes violinists play the entire chord at once, but mostly they break up the chord into its component notes to play them one at a time, in a repeated pattern.

Below, you see a phrase of Offenbach’s famous “Cancan” with the Roman numeral for each chord right underneath that numeral’s corresponding notes. You can deal with playing the phrase by arpeggiating the primary triads, which means playing each note in turn, in other words making them into what musicians refer to as broken chords.

Broken chords aren’t a bad thing (they’re not like breaking a precious antique Chinese vase in the Ashmolean Museum in Oxford, as an unfortunate tourist did when he fell down the stairs). The term just means you play the notes one at a time, in turn, instead of all together.

You can play the harmonies while the keyboard on the audio track plays the melody. Follow the lower line of the music, and play the notes of the broken chords. Here’s how: Using short strokes near the middle of the bow, play each note with vigor. You need finger 2 to be really awake for this song, because it fills in the middle note of each broken chord!

Use open strings wherever possible, and just make sure your bow stays well on track when you cross strings, to keep a clear and bright sound. Get ready to play before the music starts (like a tennis player at Wimbledon preparing to return a ball), listen to the first measure of the tune on the audio track, and then begin to play in measure 2. In the last measure, the music calms down (phew!); you play quarters and then a half note to finish up.

After you get ready to play, count one, two, three, four while the first measure is playing so that you begin the accompaniment on time and with confidence at the start of the second measure. 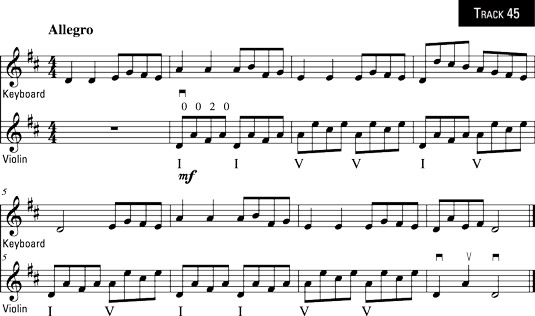 You can-can play harmony with “The Cancan”!

Musicians call the kind of pattern, or figuration, of the chord that you see in “Cancan” an Alberti bass, named after the minor composer (though he also composed in major keys) Domenico Alberti (1710–1740) of Venice. He used the pattern rather too much in the left-hand parts of his sonatas for keyboard.

Violinists use many different ways of taking the notes of a chord and turning them into arpeggio-like patterns to accompany melodies. But sometimes they can actually play two notes together from a chord to give a full sound to the harmony.

Katharine Rapoport is an accomplished violinist and violist who taught violin, viola, and chamber music at the University of Toronto for over 25 years. In addition to authoring teaching manuals and syllabi—as well as articles for Strad Magazine —she has performed live in Canada, the USA, and across Europe.