How to Play Bowing Patterns in Bluegrass Fiddling

Bowing is very important in bluegrass fiddling, as it flavors the music to sound unique to the style. By combining certain notes in a bow and then separating others, you’ll find certain patterns that you can generally follow in a lot of music.

The Nashville shuffle, which is often called the simple shuffle, is a very common bow pattern in bluegrass fiddling. This is an important bowing to do properly, as it really gives songs a hoedown feel.

Do you hear how the second and fourth beats are emphasized? This is the style you should try to achieve by pressing more into the bow than usual (called accenting).

Take a look at the song called “Durham’s Bull,” which has Nashville shuffle bowings. 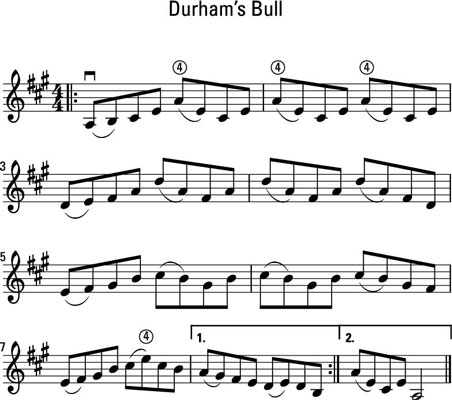 Now listen to “Durham’s Bull” and hear how it incorporates the Nashville shuffle bowing.

Because “Durham’s Bull” is in the key of A, make sure you don’t miss any of the sharps (F, C, and G). Play the song slow to start; you’ll naturally build up speed. The faster this song is played accurately, the better it will sound.

Here is another famous bluegrass tune with the Nashville shuffle. The tune is called “Bill Cheatham.” 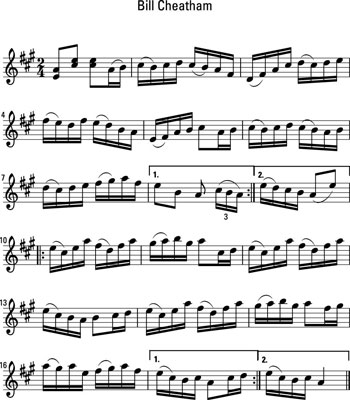 Putting in your own Nashville shuffle to “Blackberry Blossom” 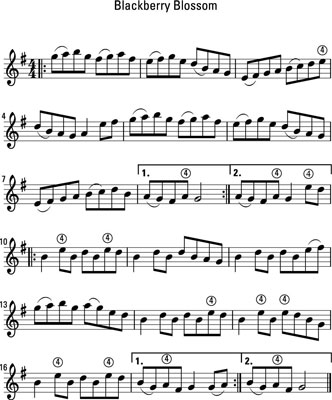 Now listen to “Blackberry Blossom” played at a medium speed.

Getting into the Georgia shuffle

In bluegrass, a unique bow pattern that really brings out the style of the music is called the Georgia shuffle. This bow pattern accents the off-beats and has three notes slurred into one bow stroke. Take a look at the bow pattern for this shuffle and where the accents and bowings lie.

To get the best sound out of the Georgia shuffle, make sure your bow grip and wrist are very relaxed. Having flexibility makes it possible to get a clean sound instead of a scratchy sound with the accents. Because the emphasized note is often a single note by itself, you have to use your index finger to move the bow quickly while keeping the rest of your hand relaxed.

Check out the music for the song “Ragtime Joe.”

Now listen to “Ragtime Joe” and how the George shuffle bow stroke is applied throughout the piece. 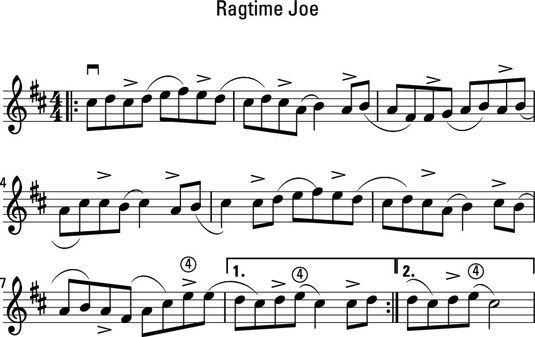 You should learn the notes of “Ragtime Joe” first before attempting to put in the accents and slurs. The ornamentation makes the song much more difficult to play and create a clean sound. Just play the notes for a few days without the ornamentation to get the hang of the tune.

Putting the Georgia shuffle into “Fire on the Mountain”

Here’s another song that uses the Georgia shuffle technique, “Fire on the Mountain.”

Play this song first with no slurs, as the Georgia shuffle can really complicate the bowing. You can also try to play the entire song with the Nashville shuffle bowing instead, which is easier. Make sure that you work on the notes first though! 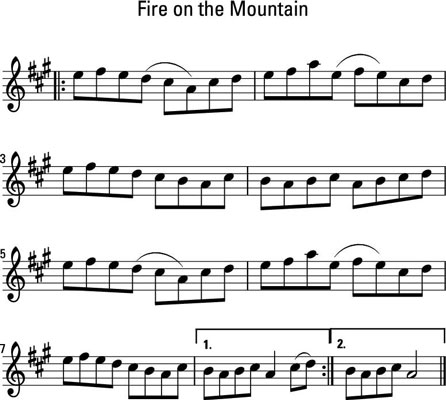