Think about how many keys/notes a piano has — 88 total. Do you think the fiddle has more or fewer notes? Most people would say a piano is able to play more notes, but actually, the fiddle can play more — each string has over 30 notes! This fact should tell you that putting your fingers in the right spot is pretty important. You’re going to need some help at first.

No fingers: This is considered value 0, or open.

The index finger: This is considered your first finger, or value 1.

The middle finger: This is considered your second finger, or value 2.

The ring finger: This is considered your third finger, or value 3.

The pinkie: This is considered your fourth finger, or value 4.

You need to know exactly what finger is your first finger, your second finger, and so on without even having to think about it. This will go a long way toward helping you to read music.

Don’t worry about the pinkie finger for now.

Listen to this to hear what the basic note pitches on the fiddle should sound like.

Take a look at where each of these notes falls on the fiddle. 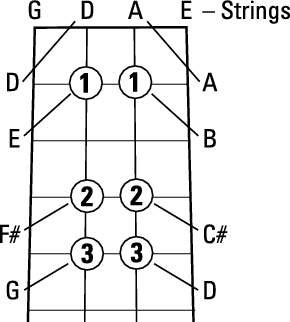 Before you actually start making contact with the fingerboard to make different notes, you need to put down a set of stickers so you know exactly where your fingers will be going. Don’t rush through this process; the closer the stickers are to the correct spots, the more in tune you’ll be.

You may have to clean off the gunk from the sticker if you adjust too many times. You may also want to try a new sticker after a few attempts to make sure it sticks well enough.

Although you won’t be working with the 4th finger for a while, you can still place the sticker on the fingerboard where it should go. On the D string, your 4th finger will be an A pitch. You can follow the preceding steps to place the 4th finger sticker, which will be about the same distance as your 1st finger is from your 2nd finger.

Don’t feel like you’re cheating by using stickers. Because the fiddle is fretless, you need to know exactly where to place your fingers to sound your best. The stickers shouldn’t be on your fiddle forever, but give yourself a timeline of about 6 to 12 months before you take off the stickers.

Now that you have your stickers in the right spot, it’s important to note what they represent. Because all the first finger notes across the fiddle are parallel to one another, you don’t need to put stickers on every string. Using the finger tape does represent this clearer than the round stickers, but either one works.