How to Get the Droning Sound for Old-Time Fiddle Tunes

The drone sound is unique to the old-time fiddle style and happens often in certain places to give the music flavor. A drone sound happens when you play two notes at the same time — an open string and the string adjacent to it, which can also be open or fingered.

Getting the classic drone sound takes some practice. Playing two notes at the same time will take some getting used to.

Working on hitting two strings at once

It is important to apply proper technique to get a clean sound when moving the bow back and forth. The same goes for stroking two notes at the same time. The only difference is that your bow will be in a slightly different spot (in between strings). Start by trying to create a good sound hitting one string at a time:

Try to get as clean of a sound as possible. You don’t need to apply extra force to hit two strings at once. If you apply extra force, you’ll get an unwanted sound instead of a clean sound. Keep the bow speed constant.

Watch here to see how to hit two fiddle strings cleanly at the same time.

Now that you understand how to hit two strings at once, you’re ready to start droning. Don’t let your left hand tense up at all through this process, as that’s a common reason for unwanted sounds.

To further understand this, check out what tunneling looks like on the fiddle.

Having your knuckles up high and finger angles back is very important to create proper tunnels.

This measure requires droning. Try to see whether you can get a clean sound. If you can’t, refer back to the previous steps on getting a clean sound hitting two strings at once. There’s no change from that except that you’re adding in the steps of putting a finger down.

This line shows that you should play the D string while playing all the higher notes on the A string. To do this, you have to set your bow in between the strings to hit two strings at once. A little added pressure on the index finger will help.

You may have a bow speed problem while doing drones. Try to keep the bow moving at the same speed at all times because slowing down and speeding up makes it hard to get a clean sound.

You can also play the open string on the opposite side to do drones. This is a little bit harder because it requires you to avoid touching the open drone string with your finger. Here is a second drone measure, playing open E, along with the A string notes.

Now listen to what droning measure 2 sounds like. Sliding into the fourth finger creates a cool sound, but if you can’t do it yet, that’s fine.

Check out how the hand should look when playing notes on the D string while playing open A. Try to stay as far away as possible from the string that’s being used for droning (the open string). Touching it will cause the sound to be off. You’ll know it when you hear it. 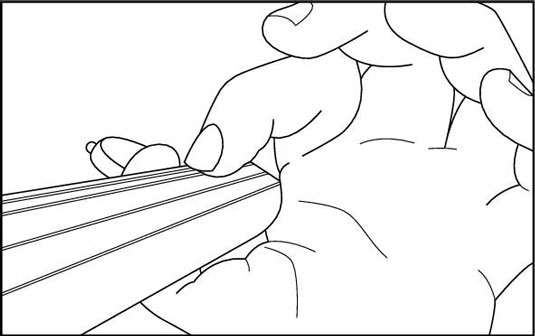 In each of these droning measures, you should find that the fourth finger note has the same pitch as the open string. If you notice that this isn’t the case, then either your strings are out of tune or you aren’t reaching far enough.

Droning can be one of the most frustrating things to learn if you don’t have proper technique. Like anything else, it takes practice, so be patient!

There’s nothing like getting that classic drone sound in a fiddle tune. Now that you’ve learned the basics, let’s try putting that training into action!

Here’s a song called “Betty Likens,” which is a good tune in which to put the drone. 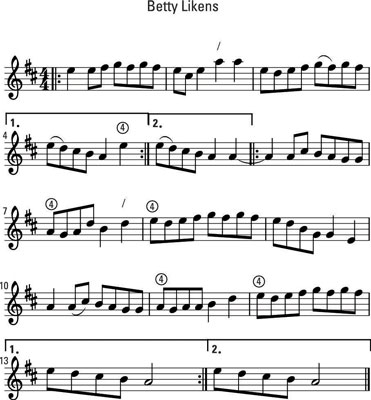 Listen to measure 4 of “Betty Likens” broken down very slowly to include some drones. Only do this when you feel familiar with the entire song first.

Now, listen to “Betty Likens” with the drone technique played slowly. Each time through, you’ll notice a different variation. 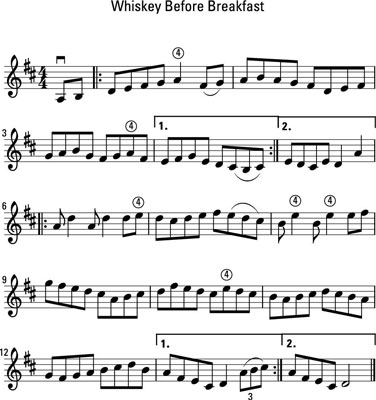 Listen to the first measure of “Whiskey Before Breakfast” which is played while droning with open A.