How to Cross Strings on the Fiddle

Because the fiddle has multiple strings, you need to understand how to get the bow from one string to the next properly (and smoothly). What most people do when crossing strings (moving the bow to a different string) is use their big muscles (again!) instead of keeping the arm muscles relaxed.

Here’s how to cross strings properly:

The incorrect way to do this drill is by using your wrist instead of your entire arm as a system to change strings. Doing so causes more inaccurate string changes, so you definitely want to make sure your elbow is moving to change strings and not your wrist at this point. 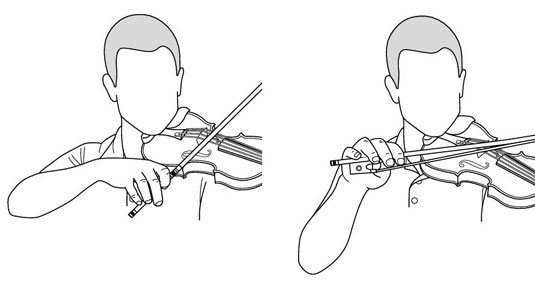 Here are some things to look out for when changing strings:

Although you use your entire arm in the crossover, that doesn’t mean that your muscles should be tense while changing positions. Think of it like this: If you were told to raise your hand up, you wouldn’t flex your muscle as hard as you could to help you achieve that movement, right? The same concept applies to crossing strings.

There’s no advantage to going slow through this process. You want to get out of that in-between elbow position as quickly as possible or the fiddle will sound bad when crossing from one string to the next. It works much better to move as quickly as possible, while not tensing up your arm, of course. You don’t want your arm to be tense when you move the bow from one string to the next.