How to Change Positions on the Fiddle by Shifting

Many songs you will learn as a beginner on the fiddle are in what’s called the first position. This refers to the standard position of your left hand on the neck of the instrument.

A couple of the notes that exceed this range are C and D on the E string. You don’t see these notes often in fiddle tunes, but you have to be prepared when they do come up.

Now take a look at this diagram, which shows you where these notes are located on the fingerboard. 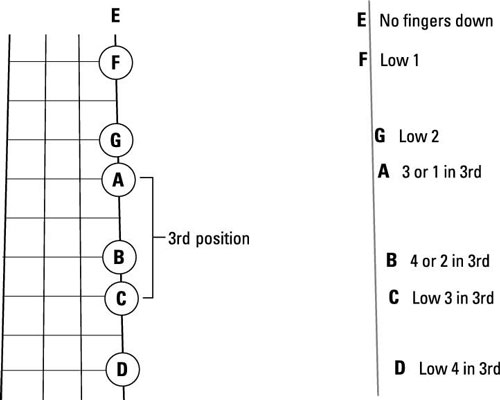 Moving into second and third positions

Focus first on third position, as it covers not just C but C and D both. If you shift into second position, you may find that you can’t reach the D without excessive stretching of the fourth finger, but shifting into third covers both the C and the D. You’d think that learning second position first would make more sense, but learning third position will be much more helpful!

You still need to understand where both the second and third positions are. Here’s a guide:

A good way to practice these positions is to play the C major and D major scales. Both of these sets of notes bring you into the high C and D notes. In the D major scale, you actually play C♯, which is a half-step higher than C. Follow the fingerings in the music to shift from first position to third position.

Confused about all this shifting stuff? You aren’t the first! Shifting is one of the tougher concepts to learn because it’s a completely different way to find notes. Watch this to see how to play the C major and D major scales on the fiddle and to see how to shift your hand.

As you shift into second or third position, move your whole hand, especially the thumb. Moving your thumb is very important to find exactly what position you’re in on the neck. Also, make sure you don’t grip the neck too hard or shifting will be harder.

If you want to really get the concept of this, play C and D in third position (on the E string) and compare that to C and D in first position (on the A string). See how the spacing is slightly different? This will take time to master, as it’s all muscle memory.

Are you wondering why you can’t just stretch for these notes in first position? When songs start speeding up, you’ll find that it takes too much time to stretch for a C or D note on the E string. Also, when you stretch you’re more likely to not hit the notes in tune. Your playing will be much more consistent if you shift the hand.

Violin music has a lot more spots where you’ll need to shift than the fiddle music has. Some violin songs require you to go as high as 11th position. Yikes! You may be feeling glad you chose to learn the fiddle over the violin.

Trying your hand at shifting in a song

“Song of Christy” requires some shifting of your hand into third position. 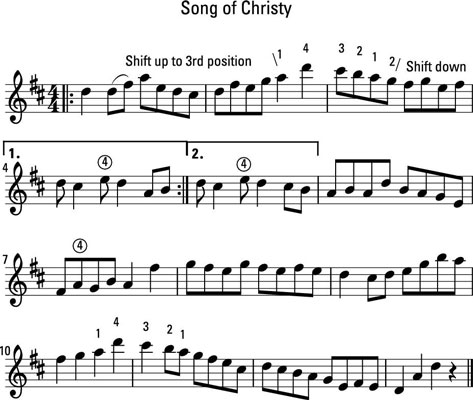