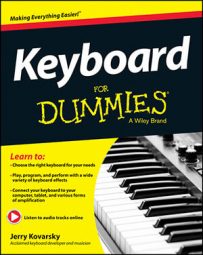 MIDI is a digital language developed in 1983 that allows instruments and devices to talk to each other by sending various messages back and forth. These messages include performance gestures, such as what notes you play, how you play them, whether you move any sort of controller, and so on. In 1996, the music products industry agreed on a set of standardized sounds, effects, and controller message response called General MIDI (GM) so that MIDI songs could be shared between devices and always play back sounding more or less the same. If a product has a GM logo on the front, it includes the sounds in the order shown at the MIDI Manufacturer Association (MMA) website. Using the same type of sound in each program location and following this organization allows companies to create products and share musical performances that always play back the song files with guaranteed results.

The original GM Level 1 specification defined a set of 128 sounds, covering the most common instruments needed to play most styles of music. When you load or play a standard MIDI file song file in your keyboard, it automatically uses this bank of sounds, and the song plays back correctly. If you're just looking for sounds to play, this GM bank may sound a bit plainer than your other choices, but it's perfectly fine to use. And it may be the only place you find some more exotic sounds because it does include ethnic instruments such as the banjo, bagpipe, sitar, and shamisen, along with sound effects such as a car horn and audience applause. You can find the complete list at MMA's GM1 Sound Set.

The Level 2 version of the sound set, also known as GM2 (ratified in 1999), adds another 128 variations, offering more choices for the main categories of sounds. You get more varied pianos, guitars, basses, and such, expanding your sonic choices. The program numbers remain the same (0 always calls up a piano, 26 an acoustic guitar, and so on). To access the additional sounds, you use a second type of command, a Bank Change message. In the MIDI standard, you can select a sound from within a group of 128 programs by sending a Program Change message. In GM2, multiple banks of 128 sounds are possible; to change to a different group of 128 sounds, you send a Bank Change message followed by the Program Change you want. Check it out this Wikipedia list of GM2 sounds.