How to Play Your Keyboard with Accompaniment

By: Holly Day and Jerry Kovarksy and Blake Neely and David Pearl and Michael Pilhofer and
Updated: 11-29-2022
From The Book: Piano & Keyboard All-in-One For Dummies 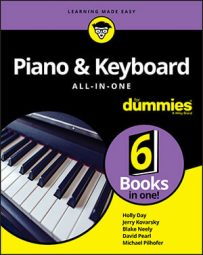 The concept of using auto-accompaniment is simple: You play some notes on the lower range of your keyboard, and that tells the system to start playing some backing music in the key you gave it. You choose the style of music it plays from the choices presented on the front panel.

The result is the sound of a full band playing, giving you a professional backing track that you’re in complete control over.

Playing with accompaniment usually means you have a split keyboard, with the lower range (left hand) dedicated to playing notes/chords to trigger the accompaniment and the right hand having a live sound to play your melodies with. Some arrangers and digital pianos have a full-play mode, where you play acoustic piano with two hands and the keyboard uses your two-handed playing to determine the chords.

The unique thing about the accompaniment “engine” is that it can adapt these parts for any chord you give it, changing the notes within the pattern to fit the various root tones and chord qualities in music (major, minor, diminished, augmented, and so on). This adaptability is how auto-accompaniment differs from a prerecorded backing track, which rigidly plays back the exact notes you played to create the part.

Simple portable keyboards don’t always have full auto-accompaniment, so look for a button labeled Chords, Accompaniment On/Off, ACMP On/Off, Arranger Mode, and so on. These options indicate that you have full accompaniment parts, not just drums.

Here’s how to get a pattern playing:

On low-end models, the pattern names may appear on the front panel. On other models, the names are displayed on the screen. Higher-end models present the Styles/Rhythms on multiple buttons, with each button representing a category of styles arranged by musical genre.

Breaking down an accompaniment pattern

An accompaniment pattern usually has the following elements:

Every part will not always be playing; parts may come in and out depending on a number of settings and factors, such as which variation you’re using and the taste of the pattern programmer.

In Book VI, Chapter 2, Audio Track 143 is a style broken down into its separate elements or tracks.

Mixing the sound of the band

Mixing a musical recording involves adjusting the volume balance of each of the instruments, deciding which speaker they come out of (called panning), and possibly adjusting or changing the effects that are being used. Mid- and higher-priced arrangers give you access to these functions. Taking control of these aspects of your backing band allows you to make the sound exactly the way you want it.

How do you know whether your keyboard has this capability? Look for a feature/parameter called the Mixer.

A skilled musician/producer has already volume-balanced all the styles and rhythms in your keyboard, so you probably don’t need to make big changes. But two common scenarios require a little adjustment here and there:

To change the volume of a part (it may be called a Part or a Track), you select it, use the interface controls to increase or decrease the volume parameter value, and then resave the style/rhythm.

To turn off a part entirely, you may have two options. If your mixer design has a dedicated Mute parameter, you can use that parameter to turn off the part. If it doesn’t have a Mute, simply turn the part volume all the way down to 00. Again, be sure to resave the Style/Rhythm.