How to Identify the Keys on a Piano

Explore Book Buy On Amazon
Modern piano keyboards make use of 52 white keys and 36 black keys, totaling to 88 keys on a piano. which includes seven octaves plus a minor third (from A0 to C8). The black ones are raised and are set farther back than the white ones. Each key on the keyboard represents a specific musical note. The white keys on a piano keyboard signify the seven note names (A-B-C-D-E-F-G) and the black keys are used to identify sharp or flat notes.

Identifying musical notes by the black keys on a piano 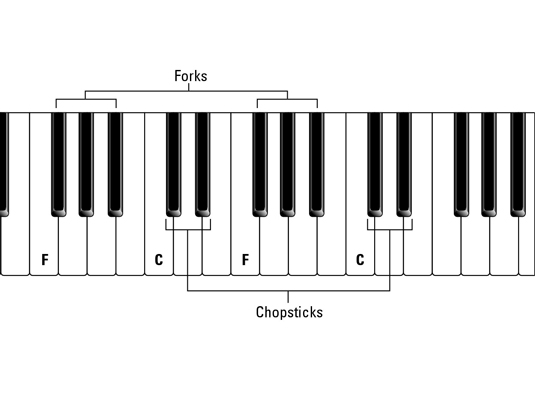 You can use these chopsticks and forks to help identify the white keys on a keyboard:

Moving up from C you have the notes D, E, F, G. When you get to G, think “Go” as in “go back to the beginning of the alphabet.” The alphabet pattern repeats over and over in octave groupings, which are groups of eight white keys and the black keys between them.

The keys on a piano: sharp vs flat

As we mentioned earlier, the seven note names (A-B-C-D-E-F-G) are all on the white keys. Black keys represent separate musical notes. The black keys are assigned the same name as the closest white key but with one of the following suffixes added on:

Here’s another culinary metaphor to help you remember sharps and flats. At your imaginary musical place setting, a white key represents a plate, so

Just remember chopsticks and forks, knives and napkins, and you’ll never forget the names of the keys on a piano . . . but you may feel a little hungry.

Because each of the black keys lies between two white keys, each black key has two names, depending on the white key you approach it from. For example, the black key to the right of C is C-sharp, but it’s also D-flat.

Jerry Kovarsky is a musician, technologist, product developer, brand manager/marketeer, and expert in the field of musical keyboards. Kovarsky is a contributing writer to Electronic Musician magazine.