How to Set Reed Action on a Harmonica

Harmonica reeds can be adjusted so that they respond to a player’s breath in a particular way — for instance, to strong or gentle attacks or to heavy or light breathing. The result of these adjustments is called reed action. You set reed action by changing the curvature of the reed relative to the reedplate.

For maximum efficiency in responding to your breath, the ideal reed curvature starts with the base of the reed as close to the reedplate as possible. The reed remains parallel to the reedplate for about half its length, and then curves up toward the tip. By changing the curvature of the front half of the reed, you can influence the reed’s response to hard and soft attacks and to bending.

The reed should never dip into the slot and should never curve downward from base to tip. A reed that does this will respond poorly or not at all when you play it. 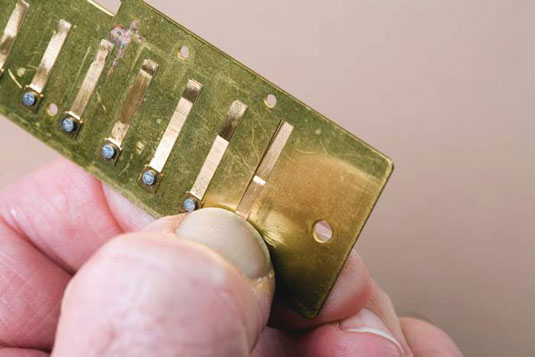 If you flex the entire reed upward, you’ll raise the lowered reed base. Instead, you want to leave the base of the reed where it is and raise the rest of the reed. You can limit the effect of flexing to one portion of the reed by holding down part of the reed with a finger or tool and flexing the tip.

However, the stroking method allows you to introduce a curve to a precise area of a reed. When you use the edge of a tool to stroke a reed while applying pressure, the reed will curl toward the edge — like curling a ribbon with a scissor blade. 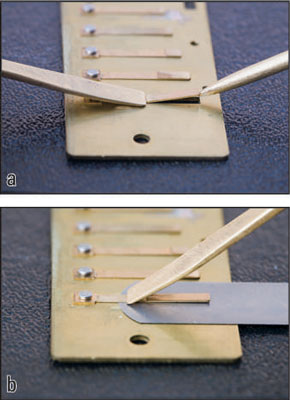 A reed’s response to breath

A reed needs to have a gap under its tip or it won’t start vibrating. The gap width should be approximately equal to the thickness of the reed tip; keep in mind that long reeds require higher gaps than short reeds. A higher gap favors hard playing (the combination of hard attacks and high breath volume) and a lower gap favors soft playing.

You should gap your harps to respond efficiently to your style of playing while delivering maximum volume and efficiency. Finding the gaps that work for you is a matter of experimenting.

A reed’s response to bending

When you bend a note down, both the blow and the draw reed respond. The reed that’s higher in pitch bends down and moves closer to the reedplate. Notes that bend a long way, like Blow 10, Draw 2, and especially Draw 3, can use a little extra curvature away from the reedplate. This curvature allows these notes more travel toward the reedplate as they bend down.

An ideal reed response allows you to bend notes down and up with equal ease and play as hard or soft as you like. However, balancing these priorities sometimes leads to conflicts. Bending down and up have slightly conflicting needs, and soft playing and bending up (favored by low reed settings) may conflict with the ability to play hard (favored by higher reed settings).

Sometimes you can help manage these conflicts by altering your playing technique. For instance, you can strengthen your bending-up technique so you can overbend reeds with higher settings. You can also learn to temper hard playing with a softer attack and a lower breathing volume so that reeds don’t need to be set as high as before.

No matter how much you improve your technique, reed adjustment always plays a role. Your best strategy is to find a reed setting that gives you maximum reed efficiency — the most vigorous vibration with the least effort. Then you can tweak that setting just slightly to satisfy a specific need — a deep bend in this hole, an overbend in that hole, or an overall soft or hard attack.