How to Play in the High Register on the Harmonica

The high notes in Holes 7 through 10 on the harmonica can make some beautiful music, but they also pose some challenges. People sometimes associate these high notes with high tension and tiny size — as if the holes were smaller and closer together and took more force to play. But look at the holes on a harmonica. They’re all the same size.

Getting the high notes to respond doesn’t take force, either. Instead, it takes relaxed, gentle breathing that lets the notes float out. There’s no need to drag them out under protest.

Here is a little study to help you get used to making hole changes in the high register on the harmonica. Each group of four notes is all blow or all draw and moves to neighboring holes. Play each note as long as you like, but leave enough breath for the other three notes that share a breath with it.

If the highest notes don’t sound, try yawning to open your throat. Keep your mouth relaxed and breathe gently. Let the notes float out on your breath.

This exercise gets you moving through the scale in the high register of the harmonica.

Part 1 tracks the scale with simple actions, so you never play a hole change and a breath change at the same time. In part 2, every third note is removed, and you go directly up the scale, shifting one hole to the right after each blow note. Parts 3 and 4 do the same as parts 1 and 2, but starting on Blow 7 instead of on Draw 7. 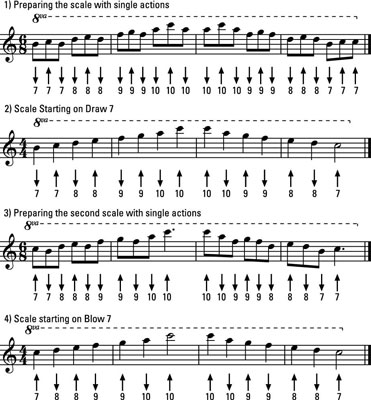 “Aura Lea” was hugely popular when it was first published in 1864. Nearly a century later it was a big hit all over again when Elvis Presley recorded it with new lyrics, as “Love Me Tender.” Look out for that leap from Draw 8 to Draw 6 and back again. 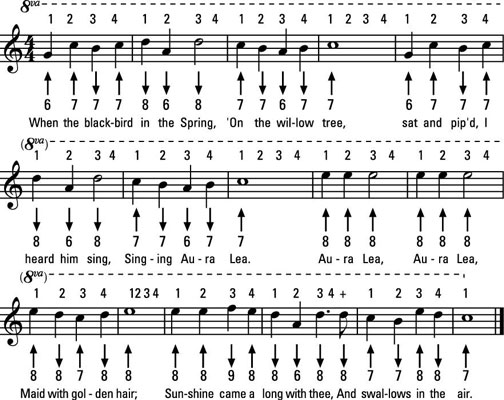 “She’ll Be Comin’ ’Round the Mountain”

“She’ll Be Comin’ ’Round the Mountain” is a tune that centers on Hole 7. Even though it travels equally into both high and middle octaves, this tune mostly avoids the shift and doesn’t contain any hole leaps. The melody goes all the way up to Blow 9, one hole from the top.

Note the “8va” and dotted lines above the tune. They tell music readers that the notes written should be played an octave higher (to write them where they really sound would be way above the staff and hard to read). The tab isn’t affected though. You play the tab exactly as it’s written. 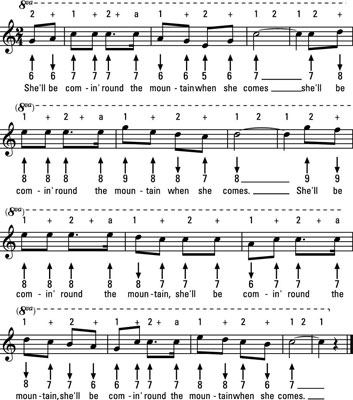 The classic Christmas tune “Silent Night” plays with Holes 6 and 7. It also contains two leaps: one from Blow 6 to Draw 8 and another from Blow 5 to Draw 8.

Start inhaling as you slide up to Draw 8 from Blow 6 or Blow 5. As long as you’re looking for a draw note, you may as well be inhaling so you can hear it when you arrive. After you get comfortable with the leaps, try to minimize the sound of the notes in between. 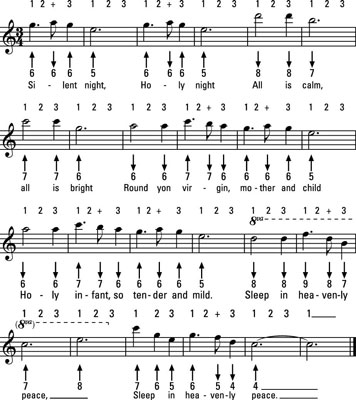