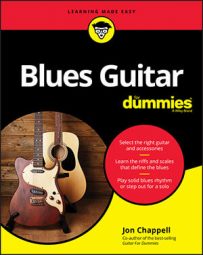 Slide guitar can be played in standard or open tunings, and each has its advantages and disadvantages. Learning the various different methods to tune for slide guitar will give you more options to let you suit the tunings to your playing style. Standard tuning can be easier to play because your melodic instincts don’t have to be translated to the altered tuning of the guitar; however, it can make it harder for the beginning slide guitarist to mute the unwanted strings creating a dissonant sound. Open tuning provides more chordal harmony, but presents a “thinking” challenge as you translate your instincts to fit a different tuning.

To get started using the slide, try the passage in the following figure, which is in standard tuning. 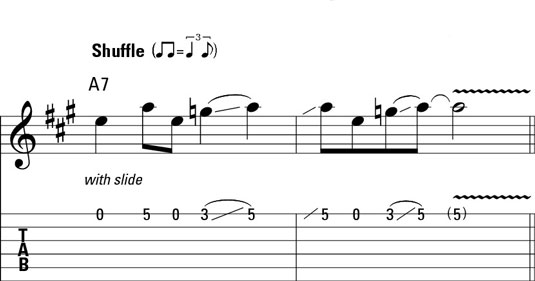 Standard tuning features the root of the chord on the top string and an interval of a fourth between the first and second strings. Because the lower note is the fifth of the chord it makes for powerful-sounding licks. Try the passage in the following figure; it isn’t that difficult. The slide doesn’t do that much, but what it does is very effective, even in small doses.

This lick is the characteristic sound of one of the most famous slide sounds of all time: “Dust My Broom” — a song originally by Robert Johnson with conventional fretting but covered in the most famous version by electric slide player Elmore James.

Don’t press too hard when applying the slide or the strings will buzz against the fret wire and fingerboard. Keep the rattle noise to a minimum when going from open strings to slide-stopped strings.

Open tunings favor the technical side of common blues licks. The main tunings, open E and open A (which are the same, relatively speaking, as open D and open G), each have their specific idiomatic licks. Open tunings have many technical advantages over standard tuning. The most prevalent is that an open tuning provides a major chord across all six strings, so holding the slide straight across at any fret yields a chord on any set of strings.