Supporting the Melody: Rhythm Comping on the Guitar

Comping is the term jazz players use when referring to playing the background or accompaniment. For the guitarist, comping translates into rhythm guitar — playing the chords. Jazz guitarists generally employ inside chords, outside chords, and full chords.

Inside chords are chords that don't use the 1st (high E) string. They're usually four-note chords played on the 2nd, 3rd, 4th, and either 5th or 6th strings. Jazz guitarists love to play inside chords — and they have a lot to choose from.

The following figure shows 15 typical inside jazz-chord voicings. Voicing is the particular arrangement of notes in a chord chosen over another arrangement to suit a musical purpose or situation. Each chord shown is movable and is shown at the lowest possible position on the neck. To produce other chords of the same type, just move the chord one fret for each half step. For example, the first chord shown is B7#9. To play C7#9, move the chord up one fret. 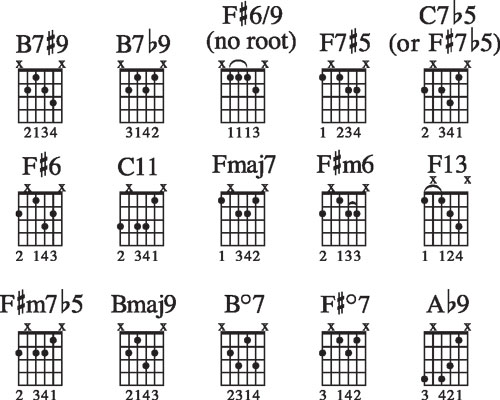 Some of the chord names may look strange. Here's how to pronounce the first three, left to right along the top row (after that you should have the hang of it): "B seven sharp nine," "B seven flat nine," and "F sharp six nine." A little circle in a chord name stands for diminished (which usually tells you to lower the 5th a half step). The next-to-last chord (in the bottom line) is pronounced "F sharp diminished seven."

If you do nothing more than strum some of these chords, you sound jazzy right away. Actually, jazz players especially like to finger these chords around the middle of the neck, or slightly above it (usually between, say, the 4th and 11th frets). Try strumming them there.

Jazz guitarists like to exercise good voice leading; that is, they like their chord changes to sound smooth and economical. Often in jazz progressions, the only difference between one chord and the next is that one of the notes has moved a fret or two. This economy of movement makes the music easier to play and, at the same time, makes the music sound pleasing. 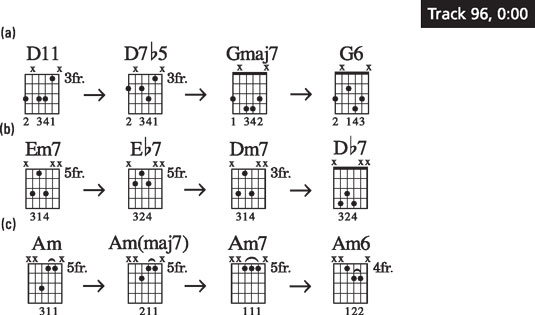 The figure shows three typical moves (progressions) consisting of inside chords that jazz players use. Play each chord once, and then play the next chord — you sound just like a jazz player. Try the progressions at different frets — these moves are movable!

Outside chord is a term used for a chord, especially a jazz chord, that uses only the top four strings — the low E and A strings get the night off. With outside chords, you often don't have the root (the note the chord is named after) on the bottom, or you don't include a root at all.

The following figure shows 11 typical outside jazz chord voicings. Again, each is shown at the lowest possible position on the neck, and each is movable. Try playing them somewhere between the 4th and 11th frets, where jazz guitarists most like to play these chords.

As with the inside moves, the outside moves shown in the following figure display the principle of good voice leading, which is so important in jazz guitar. The last move looks like a bit of an exception because you must jump around the neck, but this move is actually pretty common. You can take the diminished-7th chord shape and move it up or down three frets without changing the chord (you're changing the voicing, or order of the notes, but you're still playing the same four notes). When jazz guitarists play a diminished 7th chord, they often move it up the neck in this fashion for the sake of variety or to provide a sense of movement. 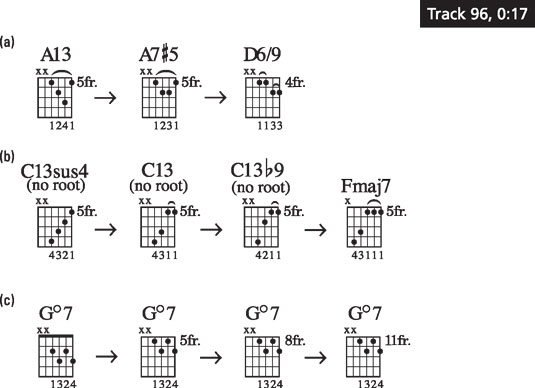 Not all jazz chords are limited to four-note inside or outside chords. The following figure shows five different full jazz chords (chords that use five or six strings) that can be played at any fret (but shown here at the lowest possible position).