Optional Fingerings for Pentatonic Scales on the Guitar

Pentatonic patterns are extremely common in popular music, especially the rock and blues genres. They’re used to play melodies, riffs, lead guitar solos, and bass lines. The tips you find here focus on how you finger the patterns. 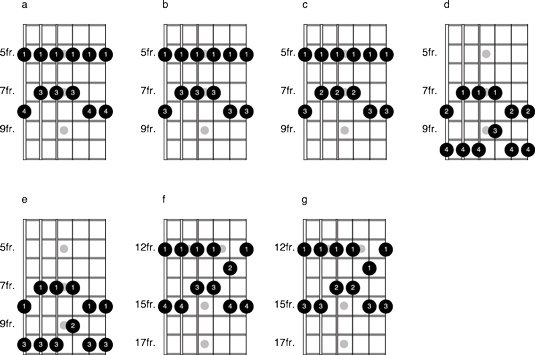 Although assigning one finger per fret makes logical sense, it may not always agree with your fine motor skill senses. Many guitarists find that their first three fingers are stronger and more coordinated than their fourth finger (referred to as the “rubbish finger” and “God’s little joke” by shred master Guthrie Govan). For this reason, it’s common to play notes at both the seventh and eighth frets with the third finger, as shown in figure b. Another option, shown in figure c, is to use your second finger at the seventh fret.

The options in figure b and figure c may be too much of a stretch for you, especially on the sixth string, but they get easier for most folks on the higher strings and in a higher position, like an octave higher in the 17th position.

When it comes to riffing and soloing with scale patterns, many guitar players prefer to work around the fourth finger when they can; some actually do better using it. If you prosper with the pinky, then use it. On the other hand, if it’s holding you back, then work around it.

Another option, which is not shown, is to play the whole pattern using only your first and third fingers. Typically, when this pattern is in use, players focus on the notes in the higher register, strings one through three, and use their first three fingers in some combination, with the thumb wrapped. This works well when hammering on, pulling off, and bending, articulations that require more dexterity than many people’s fourth finger can handle.

As you know, the pentatonic scale creates five different patterns on the guitar fretboard and is played in all keys. This concept applies to all patterns and in all keys.

Next, you play through a sample pentatonic riff using different patterns in different positions. And “riff” is a bit of an exaggeration because there isn’t much to this part. The real point of this exercise is to demonstrate that there’s often more than one way to arrange parts on the fretboard, and you should always use positions and fingerings that work well for you. 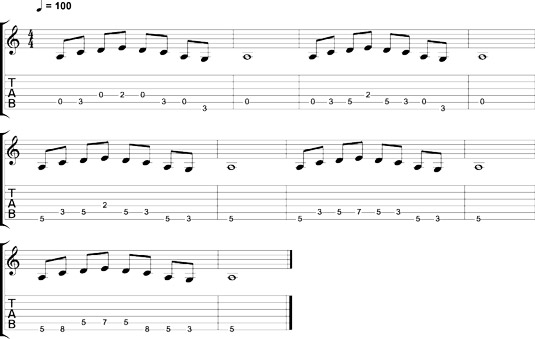 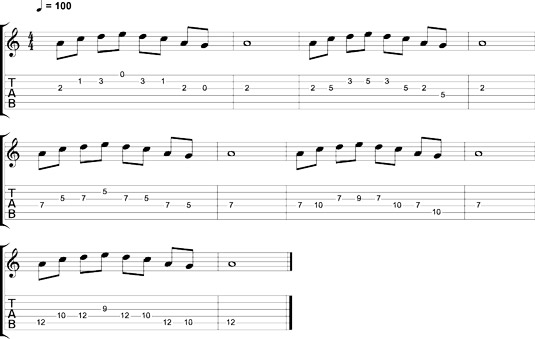 You may be wondering how you’ll know what parts look like position to position as you work through passages on your own. You have a few options:

Most guitarists use a combination of the three options to get around, which is why it’s good to know a bit about pitches, notes, and patterns.