Hybrid Picking on the Guitar: Using a Pick and Fingers

When a guitarist’s approach to playing includes flatpicking and fingerpicking simultaneously, it’s called hybrid picking. This is accomplished by holding a pick in the conventional way, and then using your remaining fingers to pluck as well. One way to get started with this is by playing chords piano‐style as you do below.

In this example, you pick the roots of each chord with the pick, and pluck the other two chord tones with your second and third fingers (medio and anular). Notice the fingerings above the tab line plus the use of a down pickstroke symbol.

Hybrid picking like this is a favorite technique of guitarist Eric Johnson, who plays unique chord voicings by skipping strings and even getting his picking‐hand pinky involved at times, usually using a sparkling clean tone with added digital delay.

Hybrid picking in the style of Eric Johnson.

To have added fun with this lick, move from A in the 5th position up to D in the 10th position and E in the 12th position, which are the I–IV–V chords used in a standard 12‐bar blues chord progression.

No lesson on hybrid picking would be complete without a twangy, country guitar example. The example below features a classic country double‐stop bend followed by a major blues scale run with combined picked and plucked notes. The open bend at the fourth fret of the third string should be played along with the fifth fret of the second string, which is not to be bent.

As you hold the double‐stop bend in position, use your picking hand’s second and third ­fingers (medio and anular) to pluck the strings, cutting the strings off after each strike (called a choke). The bend is not released until beat three. Notice that you use your picking hand’s second finger to pluck two notes in the run that follows, too. Pay close attention to the pick‐hand fingerings written above the tab.

In order to get the snappy sound that is indicative of country music, the fingerpicked notes need to really pop, so pluck them hard.

This last hybrid picking example kills two birds with one stone, so to speak. Like the previous examples, you use a combination of a pick and your finger, but with the addition of damped notes and string popping. The end result is a sound known in guitarland as chicken pickin’, a distinctive technique in the country‐music genre with players such as James Burton, Albert Lee, Brent Mason, and Brad Paisley. Chicken pickin’ is said to emulate the sound of a chicken clucking.

This example features the use of sixths beginning with E major in the 12th position and moving backward down the dominant scale (also known as Mixolydian mode). The first measure is played normally, and by using your pick on the third string and your picking hand’s second finger on the first string. The second measure is where the chicken pickin’ effect begins to take shape.

As an alternative to palm muting, you can dampen the notes on the third string by not fretting them all the way. When notes are fretted but not completely depressed to the fretboard, they’re sometimes notated as X’s as you see in measure three.

Measure four features triplet figures, which are often used together with chicken pickin’ in country‐flavored styles of music. Play the triplet figures using a pick, and then pop the first string notes with your picking hand’s second finger.

Again, the notes along the third string should be damped, whether you use picking‐hand palm muting or the technique of not pressing down all the way with your fretting hand. Measure four takes things a step further and borrows more from the country style by using chromatic steps in the triplet figures. 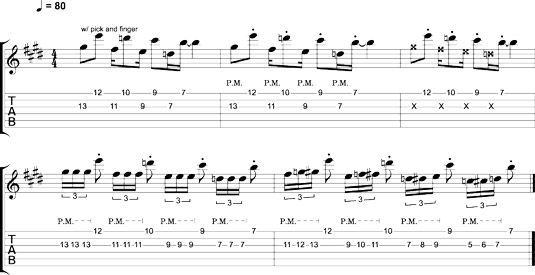 Some players prefer to chicken‐pick without the use of a flatpick, using only their picking hand’s thumb and fingers, or in some cases using a thumbpick and fingers. Chicken pickin’ is employed by rock players from time to time. Listen to Van Halen’s “Finish What You Started” as an example.