How to Play Artificial Harmonics on the Guitar

A technique that is necessary to play the upcoming artificial harmonic examples, requires you to both pluck and graze a string with your picking hand. This technique is called a plucked harmonic or harp harmonic. Follow the steps below to properly execute this technique.

Also, try using your third and fourth fingers to pluck — they work better sometimes. Remember to quickly remove your grazing finger so as not to prevent the harmonic from sustaining properly. Check here to see artificial harmonics on the guitar.

The farther away from your grazing finger you pluck, the clearer and louder the harmonic will sound. Reach back with your thumb, third finger, and fourth finger as far as you can.

With your picking hand now holding down both the duties of grazing and plucking, your fretting hand is free to do something else — namely, fret strings on the fretboard. When you barre across the first fret of all six strings using your fretting hand, you raise the pitch of all the strings by one fret, or a semitone. This means that the harmonic node previously found at the 12th fret is now moved a half-step higher to the 13th fret. All the pitches are raised a semitone too.

In figure A, you fret and hold the first fret of each string with your fretting hand and then pluck the harmonics an octave higher with your picking hand.

You can barre at any fret and pluck harmonics 12 frets higher. In figure B, you barre at the 2nd fret and pluck at the 14th. In figure C, your hands are at frets 3 and 15. Continue to work with this exercise on your own by raising the barre and pluck positions until you run out of fretboard. 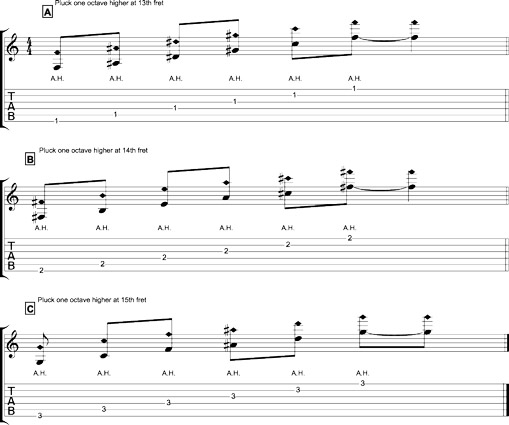 Now that both hands are involved with the harmonic-producing process, you have far more possibilities to explore. With your fretting hand holding a chord, use your picking hand to pluck harmonics 12 frets higher on each string. For example, to play the first chord, G, in harmonics, follow the steps below.

Now that you know how to trace a chord shape with harmonics 12 frets higher, play through the A-minor chord in measure two below, being sure to keep your hands 12 frets apart the whole time. When done correctly, you trace the chord shape between frets 17 and 19.

You can use plucked harmonics on any and all chord shapes you fret and play on guitar, so long as you have room along the length of the string to trace the shapes 12 frets higher. Try playing barre chords along the fifth string, or open-position chords, or chords with additional chord tones and extensions like Gmaj7, Am7, D9, and so on.

You can use this technique on any type of scale, in any key, and in any position or pattern.