By: Hal Leonard Corporation and Jon Chappell and Mark Phillips and Desi Serna and
Updated: 04-06-2017
From The Book: Guitar All-in-One For Dummies

Although lead guitar is a studied craft with an established orthodoxy (that is, you can buy books on the subject), rhythm guitar is a universe without any rules. No one can say for sure what makes up a good rhythm guitar part, but you sure know one when you hear it.

The best rhythm players in rock — such as Pete Townshend, Eddie Van Halen, and Keith Richards, just to name a few — all play in a style that’s hard to label or analyze. But part of that indefinable magic comes from the fact that these guitarists don’t limit themselves to just chords when playing rhythm guitar. They mix a healthy dose of single notes into their playing.

Although he was known for his fiery leads and stage antics (such as playing with his teeth and lighting his guitar on fire), Jimi Hendrix was a superb rhythm player. In his ballads, notably “Little Wing” and “The Wind Cries Mary,” Hendrix plays lovely Curtis-Mayfield-inspired R&B chords that sound like a cross between gospel, country, and piano figures. Hendrix also played his share of double-stops, too.

This is a hard rock progression that mixes power chords, open position chords, and single notes into one cohesive part. Note how it builds up dramatic power by starting slow and becoming increasingly active. 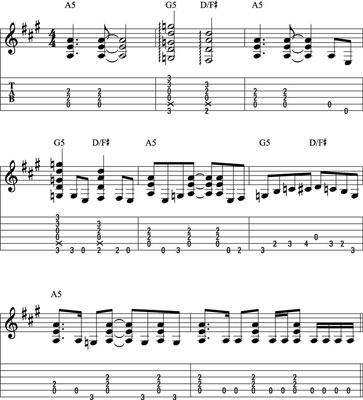 The squiggly vertical lines in bar 2 tell you to draw the pick across the string in a quick arpeggio, creating a kerrrang sound. Experiment to see just how long you can drag out the strums without losing the sense of the rhythm.

Don’t be discouraged if you can’t make the riffs sound exactly like the versions you hear in your favorite songs. As long as you can play the correct pitches in the specified rhythm, you’re doing fine. You have to find your own style.