A nut (that is, a string nut) is that thin, slotted strip of organic or synthetic material that lies across the end of the fingerboard and guides your strings on their way to the tuners. Beyond this purely functional role, the stuff your nut is made from plays a big part in shaping your tone. 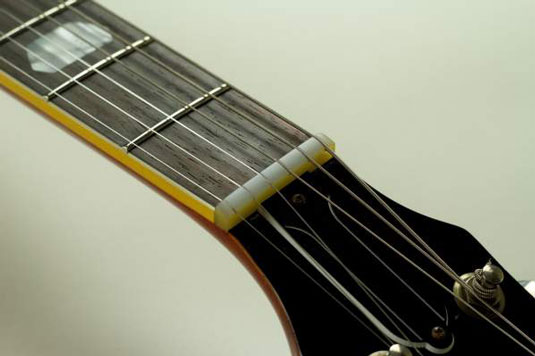 In partnership with the bridge saddles, the nut is one of the two anchor points that determine the speaking length of your string — the components that denote the break between the section of the strings that vibrates and makes all the sound and the dead portions — and it greatly affects both the way in which the strings ring and the amount of vibrational energy that is transferred into the neck and body of the guitar.

Gibson electric guitars from the golden age of the solidbody — the 1950s and early ’60s — had nuts made from Nylon 6/6, a rigid yet relatively soft material (well, when compared to steel or bone) that contributes some relatively warmth and fur amid a full, resonant tone. Fender nuts of the era were commonly made from bone, a hard (though perhaps not steel-hard) organic material that lends a clear yet resonant sound.

Manufacturers today looking for the hardness and approximate tone of bone but without its inconsistencies (it can be porous and irregular) often turn to Corian or Micarta. On the other hand, self-lubricating nuts made from graphite-based compounds or super-slippery Delrin are extremely popular with vibrato users and can be a major factor in helping to keep a guitar in tune during frequent vibrato use.

At the lower end of the synthetic spectrum, some more affordable guitars carry nuts of solid or even hollow plastic. These aren’t generally considered to be tone-enhancing components, although they may be necessities of a certain price point.

A well-cut plastic nut can still provide a decent sound and function, but in order to get the most out of the guitars they come on, many players choose to upgrade them to a nut made from bone or one of the other synthetic materials that are popular today.

A worn or broken nut — and in particular one with slots that have worn too wide or too low after time — can lead to many tuning and intonation difficulties, as well as impeding your guitar’s natural resonance and sustain. These components may look simple, but because precision is required at any point where a string is anchored, nut replacement really is a job for an experienced professional.