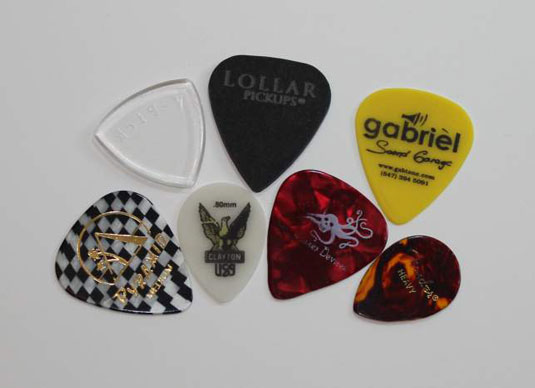 The cool thing is about all this pick talk is that you can easily try a wide variety of picks for just an outlay of a few bucks (or maybe a couple dozen bucks if you go for some of the more advanced-technology picks available today). Even at the higher end of the pick price range, this is one of the easiest and most affordable ways to modify your sound.

And then there’s the sound of no pick at all. What’s the sound of one hand clapping? Mostly a barely audible swoosh-swoosh-swoosh. The sound of playing the guitar without a pick, on the other hand — using just your bare fingers — can be extremely pleasing, effective, and musical, and is certainly worth trying after you get the hang of it.

Using bare fingers generally elicits a warmer, rounder tone from your strings, but also one that is often extremely dynamic, and with some extra snap and pop if you grab the strings slightly when plying (or vary your attack throughout). Adding some fingernail edge to the bare fingertips gives you a hybrid sound somewhere between flesh and pick.