The frets are the thin metal strips inlaid into the fingerboard atop a guitar’s neck, which serve as the terminus for the strings when you play a fretted note, that is, anything other than an open note, when the strings end at the nut. 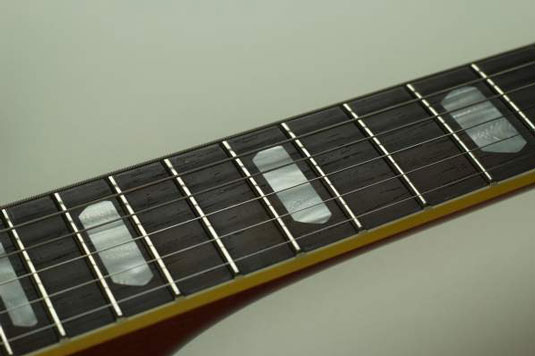 When guitarists give any thought at all to their frets, it’s usually in the context of playability. You probably tend to notice them only when they’re getting too low to provide an adequate grip, or developing divots and ridges and are in need of a stoning and crown job at the very least.

Poor frets certainly affect your tone in the broad sense, in that the better you play — with all critical components in good condition — the better you sound. Frets, however, are also a tonal component purely in terms of their contribution to the makeup of any guitar, and frets of different types, and in different states of wear, affect the sound that a guitar produces.

When you hold a guitar string down against the fingerboard, the fret takes over from the nut as the second anchor point that determines the speaking length of that string, and therefore in transmitting the vibrational energy into the neck and body wood of the guitar.

Contemporary fret wire is commonly made from only two different materials. The more traditional is a steel alloy that contains approximately 18 percent nickel-silver (also called German silver), itself a silver-free alloy of nickel and copper. The less traditional is stainless steel. The former is in far wider usage, and although stainless steel seems to be growing in popularity, it is still by far in the minority.

Traditional nickel-silver frets are actually made from quite a soft steel and can’t be relied upon to last the entire lifetime of a played guitar.

They have evolved as a compromise between tone and durability, and as they are far and away the standard they really do hold a tonal monopoly, as far as classic recorded guitar sounds are concerned, and it is a little pointless trying to describe the nickel-silver fret sound in light of all of the other variables at play on any given guitar.

That said, frets obviously need to be sound and well seated to do their best vibration-transference work, and they need to retain an adequate depth of divot-free crown surface to be playable as well.

Beyond matters of age and condition, the size of fret wire (its width and height) contributes a slight tonal variable. The three broad categories of fret profile are narrow, medium, and wide (or jumbo). Most guitars up until the late ’50s used narrow fret wire, and this remained the standard size for Fender frets for many years after.

Gibson transitioned to a medium-jumbo wire around 1959, which some players consider to be easier for string bending, as well as providing a fatter sound. For that reason, many Fender players — the likes of Stevie Ray Vaughan, Kenny Wayne Shepherd, and Rory Gallagher — have replaced original narrow wire with medium-jumbo and jumbo frets, and several contemporary variations on Telecasters and Stratocasters are made with this fret wire as standard.

Stainless steel frets have become more popular in recent years. The same considerations of profile and feel apply here of course, but stainless steel frets are a lot harder and therefore more durable than nickel-silver frets and can be expected to last a lot longer under comparable playing conditions. They also feel a little harder and slicker under the fingertips, which some players like and others don’t.

Some makers and players claim stainless steel frets give a guitar a harder, harsher sound than nickel-silver frets, while others hear this as brighter and clearer. At the same time, many respected players and makers alike claim that the sonic difference between the two types of frets is negligible, especially when all other variables on any guitar are taken into consideration.