Chain of Tools: What the Guitar Signal Chain Is

Your signal chain is the sequence of elements that work together to get the electrical signal that carries your guitar sound from its starting point to its end point. It can also be referred to as a sound chain, because its sole end is to make a sound.

The starting point is your guitar pick’s or your fingers’ contact with the guitar string to play a note, and the end point is the speaker from which the amplified sound of that note eventually emanates.

Although you may think of your sound happening instantaneously, exploding from your amp when you hit the guitar strings, it really is the culmination of an electrical signal that travels along a path and which is influenced by many factors along the way. 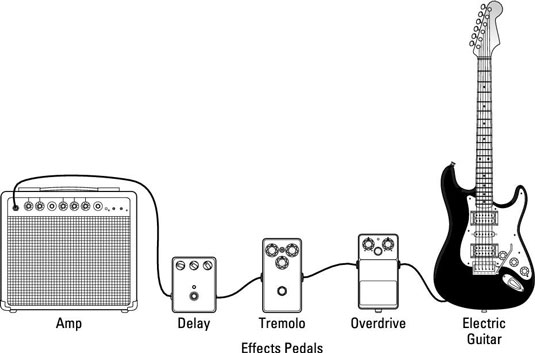 It happens very quickly, sure, but the reaction is far from instantaneous. Some stage and components are influenced by several factors that act on your signal simultaneously, but most of this occurs in series: The signal generated at your electric guitar goes through each effect pedal in turn, and the culmination of that treatment goes into the amp, and it’s likewise conditioned by various stages through that internal journey before coming out of the speaker as sound.