Technically, the floating bridge is a type of fixed bridge. It gets its name from the fact that it isn’t actually attached to the top of the guitar but is held in place by the strings’ pressure on the saddles.

These bridges are most often found on hollow or semihollow electric guitars, where drilling into the top to mount a fixed bridge could weaken the structure of the guitar or impede its acoustic resonance.

On many electric guitars, a floating bridge may have a steel bridge that is much like one mounted directly into the top of other types of guitars but which is mounted into a wooden base that safely rests on the guitar’s top. Others have the older type, with both the base and the bridge itself (which includes that saddle piece) made from wood.

Each type generally has a thumbwheel nut at either end to adjust the overall height of the bridge by moving it up or down the threaded post.

Floating bridges are often used on guitars with more delicate (thinner) tops, so it stands to reason that these instruments don’t have a tailpiece bolted into their tops either. In such cases, a floating bridge is often paired with a trapeze tailpiece.

Trapeze tailpieces are attached to the tail end of the guitar with wood screws (usually where that strap button is located) and extend over the lower part of the guitar body without touching it, held aloft by the strings’ tension. 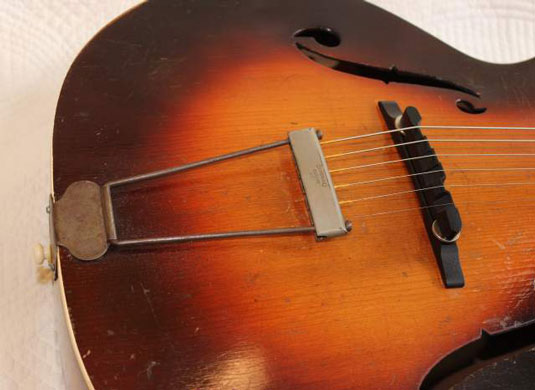 Because floating bridges are usually found on archtop hollow- or semihollow electric guitars, whatever guitarists think of as the sound of a floating bridge is largely affected by the sound of that type of guitar. They do tend to enhance, however, a round, warm, somewhat woody tone, and generally don’t have quite the sustain of solid bridges mounted permanently into solid body or semisolid guitars.

Unsurprisingly, an old-fashioned two-piece floating bridge with a wood saddle piece atop a wood base enhances a slightly softer, woodier tone, whereas a metal bridge with individual saddles atop a similar wooden base usually contributes to a somewhat sharper, clearer tone.