What You Need to Know about Scales in Classical Music

No discussion of classical music is complete without scales. Technically speaking, a musical scale is a way of dividing up an octave into various intervals. Now, in the Western world, all the intervals within a scale are seconds — major and minor seconds, that is. The characteristic sound, feel, and identity of any scale are determined by the arrangement of those major and minor seconds.

Someday you may want to learn about all the different breeds of scales, each with its own personality traits. But for now, you’re going to learn about the most common of all scales, known as the major scale. You’ve got a very handy major scale at your disposal on your versatile little piano keyboard. All the white keys form a major scale in the key of C.

So if you play a C major scale, what you’re really doing is playing whole steps and half steps in a particular pattern. And that pattern is as follows:

If you’re new to music, this theory stuff is probably frying your brain. But try it at a piano. If you start on middle C and go up the scale, playing only the white notes, sure enough — you find yourself playing exactly the pattern that was just described:

This particular scale is so easy to figure out — and so often cited — precisely because it uses only the white keys of the piano, skipping all the black keys. But you can create a major scale from any starting point by using the same scheme. All you need to do is make sure that the interval sequence is the same, and skip keys in just the right places.

Here’s an example. Start on the note D. If you skip keys in exactly the prescribed pattern (whole-whole-half, whole-whole-whole-half), you find yourself landing on black keys here and there. That’s totally okay. 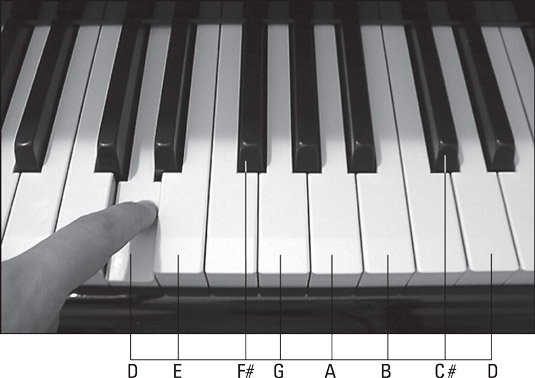 Credit: Source: Creative Commons
A major scale can start anywhere, even on a D, if you skip over keys in the right sequence.

Fantastic, isn’t it? No matter what note you start on — white or black — you can play a major scale if you step through the whole steps and half steps in the prescribed order. You may even accidentally write a top-ten hit in the process.