Understanding the Role of the Organ in Classical Music

The organ is an important instrument in classical music. In modern times, you hear the pipe organ at every wedding (and simulated at every baseball game) you attend. Pipe organs have a varying number of pipes, ranging from dozens to thousands.

The largest organs in the world have enough pipes to fill several walls of a cathedral. The pipes, of all different shapes and sizes, make different kinds of sounds as air passes through them, imitating anything from a trumpet to an oboe to a flute. 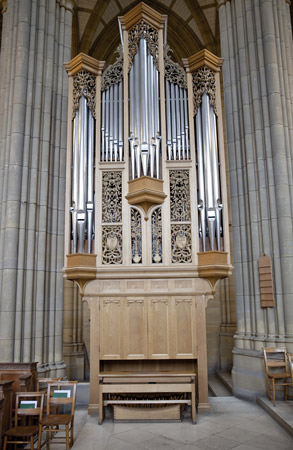 Inside the organ is an air pump. Nowadays, the pump’s run electrically — a motor ensures that a constant flow of air is available to the organ. But in the old days, the pump was run by a couple of teenagers, hired to jump up and down on the bellows while the organ was playing. If the teenagers ran out of steam, so did the organ, and the volume or pitch of the music suffered.

Today’s organ plays well even without the help of teenagers. Here’s how it works.

Pulling out the stops

For each note the organ can play, it has anywhere from one to a hundred different pipes. Each plays a slightly different sound: a trumpet sound, a string sound, and so on. If you, the organist, want to hear one of these sounds, you pull out a little knob (called a stop) on the console of your organ, near the keyboard.

The console of a really big organ is an awe-inspiring thing; it looks like a cross between an airplane cockpit and a pinball machine. Pulling out a stop for a certain kind of pipe lets air from the pump flow into that pipe, allowing it to sound. If you push the stop back in, the air supply to that pipe is cut off.

But the fun is just beginning! The organ isn’t limited to one stop at a time; you can choose as many stops as you please. If you want a sound of strings, trumpet, and oboe on the note A, pull out those three stops. And if you want a seriously hair-blowing blast of sound, you pull out all the stops. (Thus the phrase “He pulled out all the stops.”)

Nearly all organs also have pedals. They’re not like piano pedals; each of these pedals plays a low note when pressed. They’re laid out like a mini keyboard, complete with sharps and flats, so that organists can play with their feet as well as their hands.

In his day, Bach was most famous not for his compositions but for his incredible dexterity at the keyboard and at the pedals. People came from miles around to watch the organist with the flying hands and feet. You must admit that he’d be kind of fun to have at your next party.

If you play a piece of music on the organ, you may want to change from one set of stops to another very quickly. You must be a master of speed and dexterity (most organists are) to punch in all the old stops and pull out all the new ones, without missing a beat of the music.

A simpler alternative is to use an organ equipped with two keyboards (also known as manuals) and preset each one with a different bunch of stops. If you want to change sounds, you just move your hands from one keyboard to the other.