Music Business: How to Create Your Press Release

Press releases are common practice in the music business. Keep your press release under 400 words and get right to the point, whether it’s an announcement, product, or event. Make the release quickly cover the who, what, when, where, why, and how of the information you’re putting out there.

Your release also should cover standout points about why your product or event draws people in and why media should be interested in either covering it or doing a story on it. Just saying it’s a new album, or you’re “dropping a single,” “playing this night here,” or whatever else doesn’t garner interest unless you’re already famous. Dig deeper to entice, attract, and excite those who read thousands of boring press releases and announcements every day.

Core elements for your release or announcement

The following are 11 key content or written elements to include in your press release template:

Here’s an example of a release that combined both a product and an event with the launch of a book tour in 2014. This covers each of the 11 elements previously listed and allows for the most interest from the most people to make the event itself successful. 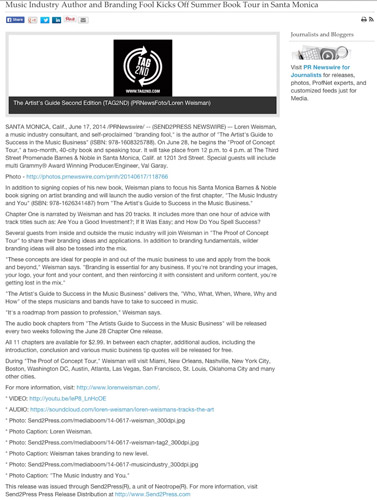 There’s no need to add “immediate release” to the top of your press release if you’re sending it out yourself. This is commonly copied and a thing of the past when releases were faxed or mailed out to differentiate from other releases that were not set to go out that day. Lose the immediate release line; it doesn’t need to be there, and it makes you look unprofessional.

The more info you add the more interest you create

It’s not about writing a book; it’s about using 400 words to draw as much interest in the event or product as well as serve to maintain and continue to grow interest in the future as your announcement or press release continues to build online optimization.

In the release shown, several items were mentioned: a list of guests coming, an announcement about a series of audio chapters being released, the kick-off location, as well as some of the other cities for other events, and product details and description.

This helped make the event and the press release more than just a single piece of promotion. There was a focus on the discussion of branding at the signing, showcasing more than just a book signing.

These elements and this template applied to your event or product press releases give you better exposure, optimization, and engagement from both fans and media.

Focusing the direction of a release

Either way, keep it interesting and keep it full of sentences that could easily be grabbed and reorganized by someone who might write a story about you or your event.

If you make it easier for a reviewer, writer, or editor to do a story on you or your release, you have a better chance of getting promotion and publicity from it. Think from the standpoint of who you send your release to, and make it easy to get a story written about you and for you.

Loren Weisman is a music business consultant, speaker, and author who has been a part of over 700 albums. He also maintains TV production credits for three major networks and has served as a media consultant for many businesses in and out of the arts and entertainment fields. Loren is an executive producer and co-creator of Leveraging Smart, a new reality business TV show airing in 2016.